The Value of Intergenerational Storytelling

Photograph by Sara Thiam. Do not reproduce without permission

“This is really starting to get interesting, because I have lots of stories to tell!” exclaimed Bernice (pseudonym), a 95-year-old participant in the newly-launched Upper Peninsula Digital History Initiative (UPDHI) in Hancock, a small town in northern Michigan’s Keweenaw Peninsula.  The tension in the air was palpable as the four older adults and four youth participants introduced themselves around the table in the conference hall of the hosting organization, Little Brothers Friends of the Elderly.  In fact, Bernice, who turned out to be the project’s most captivating storyteller, insisted that her limited education level and current vision and hearing troubles would prevent her from being able to produce a video, and she nearly dropped out of the program.  But once the storytelling got started the mood eased and the elder participants filled the afternoon with moving tales and funny anecdotes covering topics ranging from war and activism to surviving the long, dark Hancock winters as children.  They were energized – and even surprised – that others were so were interested in their stories.  To my surprise, I left that conference room with a new perspective on the tiny town I grew up in – which I thought I knew inside out.

Elders are revered for their abundance of knowledge, or xam-xam, among the Wolof of Senegal, where I have carried out most of my work as an anthropologist.  However, popular conceptions of cognitive development in the US tend to have the opposite effect on social perceptions of elders, where age is frequently deemed a deficit (Gullette 2011; Palmore 2001).  Measuring “intelligence” with easily-quantified fluid abilities such as processing speed and recall memory, which decline with age, likely bolsters such stereotypes.  But that perspective overlooks the “pragmatic” cognitive strategies that aging adults develop, as well as their increasing bank of knowledge and experiences (Schaie 2005; Li, et al. 2004; Baltes 1987).

Theorized and popularized by Horn and Cattell (e.g. 1967) as “crystallized intelligence,” these experience-based capacities include knowledge, skills and strategies that are acquired through socio-cultural environments which have the potential to  increase with age (Berger 2014:609).  Whether or not accumulated intelligence will be considered a form of wisdom in a particular socio-cultural setting is culturally relative and not necessarily age-dependent (Staudinger & Gluck 2011).  Nonetheless, crystallized abilities assure that people of older ages can draw on an expanded collection of life experiences in their reflections and analyses in ways that may escape young minds (Ardelt 2000).

The demonstrated cognitive adaptability of the UPDHI’s student participants has complemented the skills of the elders by demystifying the video production process, which seemed daunting to several of the elder participants prior to participation.  Instead of feeling intimidated by the fluidity of the technologies and dissemination platforms we have accessed, I have observed that the adolescent participants are themselves integral to and driving project innovations in real time.

Documented socio-economic and health-related benefits of intergenerational programs lead them to be called a “win-win” intervention in public health research, in that as the US population ages they present a cost-effective model to assure that increasing numbers of seniors can stay cognitive active and socially engaged, while younger people can benefit from elders’ assistance in schools or though civic engagement opportunities (e.g. Fried, et al. 2004; Kuehne 2013; Schmidt, et al. 2012).  In capitalist society, intergenerational programs therefore become particularly valuable as health interventions because they allow two typically non-productive, comparatively vulnerable and costly population sub-sets – children and the elderly – to become economically productive by serving each other’s well-being.  However, independent of this economic rationale, what is the potential social value of empowering elders to share their knowledge, and encouraging youths to recognize its (and their) social contributions? 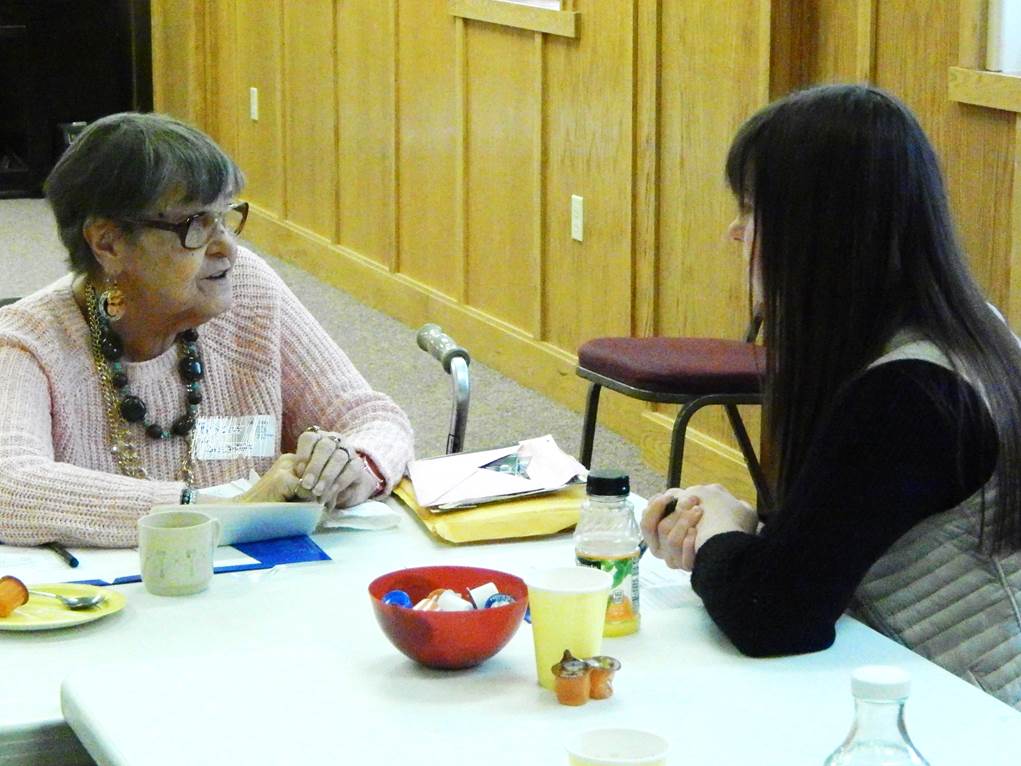 Photograph by Sara Thiam. Do not reproduce without permission

Over the course of the UPDHI session described above, the locus of power shifted as dramatically as the mood.  When it was her turn to introduce herself to the group, Bernice meekly insisted, “I don’t have anything to say; I am a simple lady.”  But it did not take long for her to control the atmosphere of the entire room.  She commanded attention and told moving stories with vivid imagery and meticulous detail.  Later, we watched video clips of each elder participant, and Bernice could not help but smile when the group laughed at her humorous tales.  While I too found the clips entertaining, I found them particularly enlightening with respect to her childhood experiences living in an all-Finnish shanty-town bordering the copper mines that were responsible for populating the area with immigrants.

Drawing on my experiences in this first encounter, I intend to investigate if and how intergenerational storytelling programs like the UPDHI can act as opportunities for the social empowerment of elders in settings where they have felt their knowledge to be undervalued, as well as how they might play a role in instigating a cultural shift among youths away from associating aging with decline.

I suspect that intergenerational projects can be a social “win-win” – but not solely on the grounds of their cost effectiveness or mutual charitable or therapeutic potential.  Rather, the UPDHI promotes pairings on a more equal footing, socially and cognitively, where each partner contributes her own strengths toward the creation of a unique cultural product – which is itself the fruit of and in service to intergenerational exchange and esteem.

Ardelt, Monika. 2000. Intellectual Versus Wisdon-Related Knowledge: The Case for a Different Kind of Learning in the Later Years of Life. Educational Gerontology 26(8):771-789.

Kuehne, Valerie. 2013. Intergenerational programs: Understanding what we have created: Routledge.

Schaie, K. Warner. 2005. What Can We Learn From Longitudinal Studies of Adult Development? Research in Human Development 2(3):133-158.

Sara Thiam is currently finishing up an MPH degree at the Johns Hopkins Bloomberg School of Public Health, and she is serving as a lecturer in the Social Sciences department of Michigan Technological University.  Her 2015 anthropology dissertation from her time at McGill University is called, Forced Begging, Aid and Children’s Rights in Senegal:  Stories of Suffering and Politics of Compassion in the Promotion of Rights for the “Taalibe” Qur’anic School Students of Senegal and Mali.  Sara is carrying out the Upper Peninsula Digital History Initiative as board chair of Right Start UP, the non-profit organization that she co-founded in Hancock, Michigan, in 2015.  The UPDHI was recently awarded a $25,000 grant from the Michigan Humanities Council to enable intergenerational pairs to document the unique heritage of the people of Michigan’s Upper Peninsula.

Read the companion to this post, “Not in His Right Mind”:  The Life course of Adoptees Diagnosed with Reactive Attachment Disorder in the United States, by Rachael Stryker