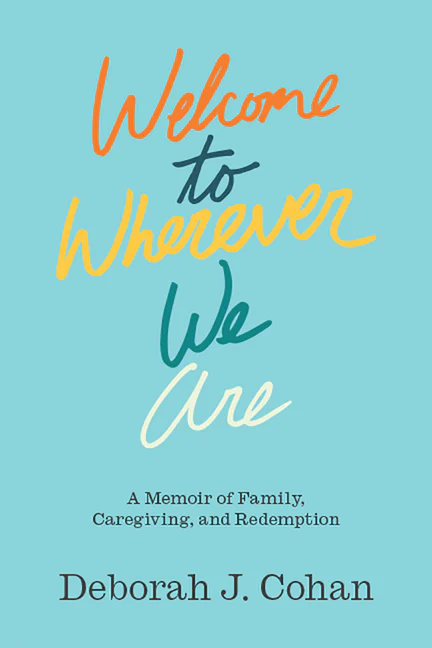 Currently there are an estimated 40.4 million family caregivers in the United States—the majority of whom are women (U.S. Bureau of Labor Statistics 2019). Their labor is usually invisible, often presumed, and makes a vital contribution to families and the economy. Family caregiving can require a substantial amount of time and effort, even when it complements paid carework. Although there is extensive research on family caregiving, there is a lack of work focusing on those who provide care for an abusive parent (Kong and Moorman 2018). Deborah J. Cohan’s memoir, Welcome to Wherever We Are, is an important addition to this body of literature. The book merges the author’s experiences as a caregiver of an abusive father with discussions of the larger social context of both abuse and care, the history of emotional abuse she experienced from him, and her own personal journey of healing.

Welcome to Wherever We Are: A Memoir of Family, Caregiving, and Redemption is a feminist endeavor. Writing about the personal is sometimes disparaged in academia, but the self is often the only subject in which marginalized people have been allowed to be experts and doing so can be an act of resistance (Cottom 2018). While social scientists study and write primarily about other people’s lives, they rarely turn this focus inwards towards their own lives (Simonds 2016). Because talking about ourselves and our emotions is considered feminine, it is seen as self-indulgent (Simonds 2016). In this memoir, Cohan blurs the lines between academic research on family caregiving and family violence, and her own personal story. She and her parents are both subject and object—her experiences both personal and political.

Cohan’s book is fragmented—not quite chronological and not quite thematic. In her own words, it “is a story of brokenness—and wholeness—told in fragments” (233). It is a memoir structured as a series of personal essays that are short form creative non-fiction drawn from the writer’s lived experience that each use an object or idea as a prompt. For example, Chapter One, “Phone Calls,” uses transcripts of voicemail messages from her father, to introduce him, illustrate his abuse, describe their relationship, and talk about how it impacted her relationship with her mother and partnerships with men in her adulthood. The messages show how the intense love and adoration her father expressed contrasted with his vitriolic anger. This abusive dynamic is analytically intertwined with a sociologically informed discussion of trauma and patriarchy. Chapter Two, “The Diaries,” uses the author’s diary entries as a child to introduce us to her lived experience of abuse, and Chapter Nine, “The Gold Pen,” uses her father’s gold pen, to discuss her attachment to him, his pen, and how she wrote to heal from said abuse.

Cohan shares her life story as her father’s daughter, as a woman, and as a sociologist who studies family violence. The following quote describes how these different positions inform her work:

As a sociologist interested in family violence and gender, I knew I had the capacity to see the following, among other things: how family secrets are maintained, how caregiving is gendered, and the myriad ways that individual issues we wrestle with in our private homes are actually connected to the larger issues of family as a social institution and to other social structures. (3)

Being socialized into an abusive family taught her coping mechanisms such as continually seeking approval via perfectionism. Cohan understands this personal experience against the background of socialization into a patriarchal society that teaches women to serve, care, and nurture. The contradictory messages of anger and approval that taught her to always be vigilant in caring for her parents’ well-being over her own, ironically also taught her the vigilance required for caregiving in adulthood. Additionally, Cohan examines the intergenerational nature of abuse, including stories of the abuse her parents experienced in their childhood, as well as the complexities of loving someone who is abusive. She portrays her father as multidimensional and complex, describing him as abusive and manipulative, but intensely loving, giving, hurt, and broken.

Cohan similarly merges the personal and the political when accounting for her caregiving practices. She gives an in-depth and personal account of caregiving she engaged in—both hands-on care when visiting with her father in the earlier days of decline, as well as navigating the formal carework landscape after he entered a nursing home. In Chapter Four, “Accidents,” she describes in gruesome detail something many family caregivers have dealt with but rarely talk about—incontinence.  Grappling with how to deal with it both physically and emotionally, she was forced to manage both of their humiliation within the context of a history of cleaning up her father’s metaphorical and, as a caregiver, actual shit. Of cleaning up after his accidents, Cohan says,

When I was growing up, my dad was the only one allowed to make messes. However, when Mark and I visited him at his apartment one February after the divorce, we noticed his desk chair had stains on it…My dad was critical of everyone else’s imperfections for so many years yet in his declining state allowed himself to make many messes. His harsh critique of others was so sadly frequent that I saw my father take perfectly nice things or potentially beautiful moments and contaminate them. (57)

After Cohan’s father moved to a nursing home, providing care became dominated by navigating the complex landscape of paid carework and the for-profit health care system of the United States. She intertwines her lived experience of communicating with careworkers and managing her father’s care and finances with a background on the social context of paid carework. Careworkers from the nursing home would contact her, sometimes daily, to inform her of everything from serious behavioral issues to when it was time for her to order more adult diapers. At times, the care was excellent. Other times, he would be sent to the hospital by ambulance for a minor issue. Cohan also worried that her father would direct abuse towards the careworkers, and placed her experiences within the context of a system that exploits careworkers. Society relies on paid careworkers to care for the most vulnerable; however, they are often vulnerable themselves. Careworkers are more likely to be women of color, older, and living close to the poverty line. While caring for those more privileged, they regularly deal with racism and other general mistreatment.

Cohan similarly weaves discussions of health, decline, and end-of-life with sociological discussions of medicalization and euthanasia. She wrestles with the desire to improve and encourage her father’s quality-of-life over quantity-of life while expressing what she would want for herself. She describes her interactions with an expensive bureaucratic for-profit healthcare system that seemingly continuously encouraged her father to take additional medications. With a sense of humor, she lists the multiple medications for the same ailment, the side effects, the interactions, and the medications to treat the side effects and interactions. At the end of the list, she says,

On a Visa bill from July 2005, my father paid $1280 just to the pharmacy. I see now how he was mortgaging his finances for a health he would never enjoy, a body he would never use, and a life that turned into a maddening combination of crushed powders, tablets with gelatin coatings, and liquids. One extra little something slipped into the mess, would be untraceable. (120)

In sum, Welcome to Wherever We Are centers the personal—the inner conflict that Cohan had with wanting to provide good care, be a good daughter, and still love an abusive father through continued abuse. It is a book about the contradictions in relationships, in care, and in abuse. While it significantly adds to the research on caregiving and family violence, it does not do so from a distance but breaks down the barriers between academic literature and our own personal experiences by weaving together intimate personal stories grounded in the larger social context. It is up close, personal, emotional, and messy. Finally, Welcome to Wherever we Are is accessible and relatable, ideal for use in the classroom. It would be relevant to classes dealing with aging, death and dying, the health care system, caregiving or carework, families, and family violence.