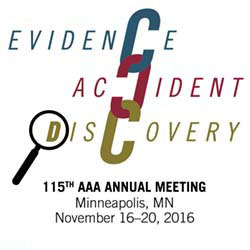 If you weren’t lucky enough to be at #AAA2016 “Evidence, Accident, Discovery,” you may have missed not only one of the coldest AAA meetings on record (seriously, we had a blizzard), but in many ways one of the more surreal, as a new President had been elected only a week earlier, with huge looming implications for many of the people we work with. Now, the annual meeting of the American Anthropological Association is a massive event and stimulation overload to begin with, but 2016 had the added element of thousands of mourners all at different stages in the grieving process (denial, anger, bargaining, depression). For me, I couldn’t be more grateful that to be in a convention center with like-minded people who care about things like climate change and indigenous rights, care of immigrants and refugees, justice for victims of violence, dignity for the disabled and for women and for older people. I was hardly alone in feeling proud to be part of an organization that so quickly responded to the new political climate where our discipline, as one that has long defended tolerance and empathy, is directly under threat. Not only did the executive board swiftly issue official statements, and dedicate an issue of Anthropology News to work on anthropologist activism, but many sections like the Society for Psychological Anthropology have started their own advocacy networks to organize and affect policy issues.
Next year, AAA will rumble up to the seat of power, Washington DC, and we’ll see what a year of organizing can produce (I’m guessing more than just some nice powerpoint slides).

This seems like as good a time as any to revive the AAGE policy discussions that used to be a regular feature of the newsletters. If you are interested in discussing policy, including advocacy work in response to the recent elections, I have set up a forum for members (click here). Additionally, if you are planning a panel or event at AAA, let us know. We work very closely with the Anthropology of Aging and the Life Course Interest Group, which, as of last year, has become able to invite one and sponsor another session at the meeting. For 2017, AALCIG is also interested in collaborating with the Senior Anthropologists Division to organize a session reflecting on scholarly autobiographies in the wake of waves of change in the field. This session could provide yet another opportunity to think about the ways careers and formative identities become both important links to an anthropology that was contributing to the world well before so many of the ‘turns’ and reinventions that the younger generation hotly discuss today. For more on these, and to join the discussion, take a look at the Conference forum.

Maybe it was the smaller size of AAA 2016 (about 5300 attendees), or the spacious venue with an enclosed pedestrian bridge linking convention center and hotel, but the whole affair seemed a little more intimate. I  managed to make many of the sessions I’d hoped to, including the AALCIG sponsored session, ‘Facing Dementia: Embracing uncertainties or exercising control?’, organized by Silke Hoppe and Mark Smit, both from the University van Amsterdam, and part of a group of six representatives from their research program on dementia and long term care. Their papers delved into the various ambiguities and blank spots of dementia, not only for the person diagnosed, but also for familes and paid care workers (and ultimately the state) as well. Each presenter had to navigate between acknowledging these uncertainties without romanticizing their productiveness or creativity. One presentation by Sussanne Van den Busse in particular, mapped out the interplay of responsibility, risk, innovation, and potentialization in the care home setting where neoliberal models of personhood moralize dependence as deviance. This has implications for the ways care staff are allowed to interact with residents, and contributes to conflicts between a paternalistic mode of care and care as an empathic attunement to the experience of the person with dementia.

The AALCIG invited session immediately followed (below), focusing this time on the social worlds that emerge as individuals face the end of life. “Living in the Wake of Death: New socialities of ageing” was organized by Laura Vermeulen and Natashe Lemos Dekker (UVA again). This panel approached up the topic of death as a source of connection and relational capacity, questioning the assumption that social death is inevitable or natural. Laura Vermeulen’s paper, for instance, described how even solitary dwelling older people living with memory loss construct ‘ecologies of survival’ both in the familiar setting of the home or by simply walking their neighborhood streets. Ari Gandsman spoke about the fascinating world of Right to Die advocates, for whom the disparity between their political rhetoric and their actual end of life decisions can sometimes come into conflict (when they don’t choose to die after all). In my own paper, I described the ‘necrosociality’ of family carer peer groups in Japan as they share uncomfortable feelings about the desire to die and to end the life of the person they care for. In all these instances life reasserts itself but in a way that marries it much closer to a consciousness of its own end.

Friday morning, things started off right away at 8am with a fantastic panel on “Friendship”  organized by AAGE member Jessica Robbins-Ruszkowski and Seth Messinger. Other AAGE members Elana Buch and Janelle Taylor also presented papers as part of this panel, each discussing a different facet of friendship, intimacy, and affection in later life.

The afternoon began with the AALCIG/AAGE business meeting and book auction, which raised over $230 for the Jacob Climo Memorial Fund for Student Travel. For more about the meeting or view the annual reports on publication, finances, membership and other activity, link here (sorry, members only).

In the evening, Jay organized reservations at a new Asian restaurant on Nicolette Mall, where our party occupied four large tables in our own private room. The food and conversation was a perfect way to end another long conference day.

The highlight of Saturday was, no doubt the AALCIG interlocutor session, which this year featured an exchange between Jay Sokolovsky, Athena McLean, and Emeritus Professor Margaret Lock. Margaret has been a key figure in medical anthropology for decades, producing important books on organ donation, menopause, and most recently, Alzheimer’s Disease. Just arrived back in the US from delivering the Royal Anthropological Institute’s Huxley Memorial Lecture, Lock was very generous in her discussion of the ways biomedical science constructs age and care. From the crowds of adoring young fans surrounding her after the talk, it was clear that this was a bound to be a memorable experience for many students and early career researchers.

On behalf of AAGE, I want to thank Jay Sokolovsky and AALCIG for all the work they put into arranging a fantastic program once again. Don’t forget to tell us about your panel or network with other AAGE members as you get organized to submit your panels via our member discussion forum.  I look forward to seeing you all in DC for #AAA2017! 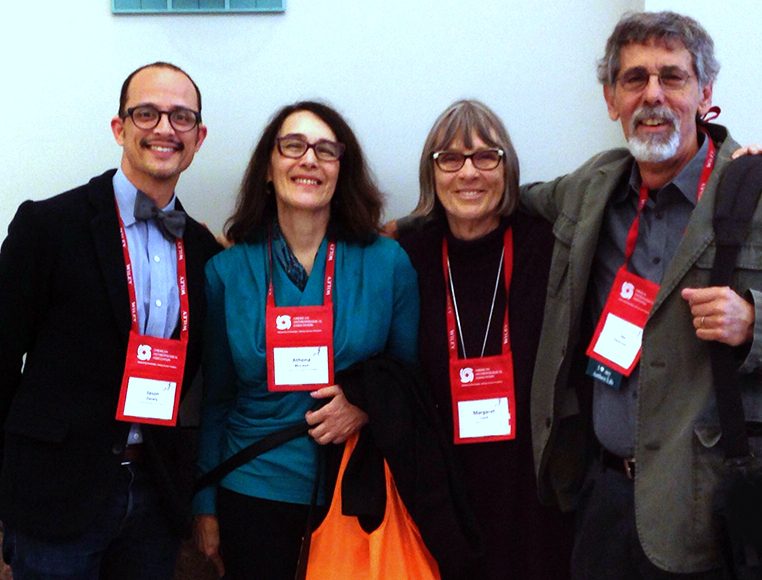 Link to the full #AAA2016 guide to the meetings

Jason Danely is Past-President of AAGE (2016-18). He is Senior Lecturer of Anthropology at Oxford Brookes University. His book, Aging and Loss: Mourning and Maturity in Contemporary Japan was published in 2014 by Rutgers University Press. He is also editor of Transitions and Transformations: Cultural Perspectives on Aging and the Life Course (Berghahn 2013). From 2011-2015, he served as Editor-in-Chief of Anthropology & Aging, the journal of AAGE. He has served as convenor of the AAA Anthropology of Aging and the Life Course Interest Group (2017-2020) and the EASA Age and Generations Network (2018-20) and from 2020 will become Chair of the Commission on Aging and the Life Course (IUAES). His current research projects look at older ex-offender resettlement; unpaid family carer subjectivities; and transdisciplinary perspectives on frailty. View all posts by Jason A Danely