The Association for Anthropology and Gerontology, and the Life Course (AAGE) was established in 1978 as a multidisciplinary group dedicated to the exploration and understanding of aging within and across the diversity of human cultures. Our perspective is holistic, comparative, and international. Our members come from a variety of academic and applied fields, including the social and biological sciences, nursing, medicine, policy studies, social work, and service provision.

We believe high-quality scholarship should not be restricted behind a paywall. In order to make our research accessible to students, professionals and the the general public across the world. AAGE publishes the peer-reviewed open-access digital journal Anthropology & Aging (above). Recent Special Issues include “Energy and Aging in the Danish Welfare State“; “Religion Spirituality and Aging“; “Age-Inscriptions and Social Change“; and “Aging the Technoscape.”

Since launching its current platform in 2014, Anthropology& Aging has earned a Seal of Approval from the Directory of Open Access Journals (DOAJ) and is indexed in ProQuest Central and Social Science Premium Collection.

AAGE is present at a number of academic and professional conferences in addition to holding its own biennial conference.  Click here for more about conferences.

AAGE sponsors the Margaret Clark Award to recognize excellent student scholarship. Two prizes are awarded annually for best undergraduate and graduate student papers on aging and anthropology. You can also see a list of all past Margaret Clark Awardees here. 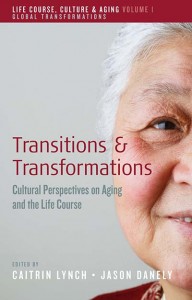 In alliance with the Aging and the Life Course Interest Group of the American Anthropological Association and Berghahn Books, AAGE publishes the book series: Aging, Culture and the Life Course: Global Transformations. The first volume (pictured left) began as an AAGE organized conference panel and was published in 2013. The seventh volume in the series examines dementia prevention and is due out October 2020. AAGE members receive a 50% series discount for all print titles in this series (and 30% site-wide)

Follow us on Facebook and Twitter join the conversation there. Members also participate in open forum discussion boards about jobs, organizing panels, or current events topics.