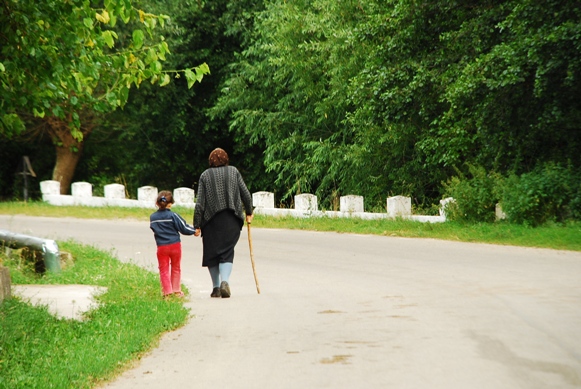 This post is part of the Life Course Collaborative Research Network blog exchange, also available on the website of ACYIG. To see all of the posts in the series, click here.

In 2004, as part of my research regarding the beliefs in ‘strigoi’ (a term referring to dead people who come back to harm and even kill the most loved relatives who survive them) in a Romanian community, I observed the roles in funeral rituals performed chiefly by older women and young children. Later, I became interested in the teaching and learning about death as components of both the processes of growing old and growing up, which are strongly intertwined. As a child, growing up in Romania with my maternal and paternal grandmothers around, I learned my own community’s view of the good way of both ageing and dying.

For older people in Romania, “successful ageing” refers to the maintenance of an active life, the avoidance of becoming physically dependent on other and dying “in full awareness.” The inevitability of death at the end of a long life and its “serene” acceptance (what Philippe Ariés (1974) called the “tamed death”) is supposed, culturally, to come with age. Good death, associated with dying in old age, is the death that finds someone “fully prepared” as part of this acceptance. After their retirement, Romanian older people’s savings are destined mainly to support their own funerals, and the shopping list will include the funeral gifts (towels, hankies, scarves) for the potential participants in their burial. These gifts (some of them offered specifically to children) are considered payment for the 44 customs that the soul has to cross in its journey through the underworld, where malefic creatures will try to make it lose its way unless they are paid. From an anthropological perspective, these gifts create “bridges” between the living and the dead, the old and the young, and they assure the deceased’s remembrance for as long as the material objects exist?.

In rural parts of Romania, growing up as a child is intertwined with the process of the ageing of their caretakers, the discourse of dying well, the performance of funeral rituals and being taught to manifest personal and cultural grief.

Both of my grandmothers, long before they passed away, made sure that all of the ritual funeral gifts and the clothes they wanted to be buried with were bought early enough so that death wouldn’t find them ‘unprepared’. Other older people from my village were going yet further, buying their own coffins and using them for the storage of cereal, before eventually being used for their intended scope. Another way of preparing for one’s own death in old age is the ritual called “alms while living” (“pomana de viu” in Romanian), which is performed only by older people while still alive. These people either don’t have any successors or feel like they need to take “extra measures” in case their successors don’t properly organize the traditional funeral feasts at 40 days, 1 year and 7 years after their death (during which the soul is traveling in the underworld). They participate as an “absent presence” in their own funeral feast as if already dead – serving and observing the others, rather than eating themselves. Conversely, at the funeral feast after someone’s death, a person of the same sex and age will wear the clothes of the deceased offered as funeral gifts, announcing his/her (absent) presence as if still alive.

The acceptance of death and the preparation for it also manifests in its inclusion in daily conversations between older people and potentially anybody else. This represents another feature of the Romanian cultural model of manifesting one’s appropriate old age, and it is quite often brought into discussions between grandparents-grandchildren. Several psychologists (see Corr 2000; Corr and Corr 2013; Kastenbaum 2000) argue that coping with death, loss and absence is an implicit part of growing up. In Romania, children learn how to face loss, how to grieve and how to remember (make present) the absent dead as part of learning how to show affection, take care and behave “maturely.” Passive learning about death (hearing adults’ talking about death; observing funerals, see Astuti 2011) is supplemented by an active teaching, both conceptually (what happens with the body and with the soul) and ritually (gestures to be performed). This “teaching about death” role is a key feature of Romanian intergenerational relationships and an important component of the kinship system of caring: while children learn how to take care of the elderly from their parents caring for their own parents, grandparents take care of their grandchildren by teaching them about how to age and die “with dignity” (according to the community’s cultural norms), and how to care for the dead. From an anthropological perspective, teaching children about death is part of an elderly caretaker’s role, and becomes an assurance of the maintenance and transmission of culture.

In many communities from the South of Romania, the teaching goes even further by interchanging various roles in funeral rituals. ‘Bringing the water for the dead’, a funeral ritual meant to assure the soul’s water for its journey through the underworld, can be performed either by a young girl ‘who didn’t meet men’ or by an old ‘clean’ woman (a woman who has entered menopause and does not have sexual relations anymore, usually a widow). Both groups – the children and the elderly – are represented as having a ‘fringe’ social status. Thus they are considered to have a higher capacity for communicating with the other world through ritual because of their proximity to it through life cycle. It is this status of children and the elderly in the funeral performance that reflects death as a manageable condition and doesn’t allow it, ritually, to damage the community.

While helping her to sew her own funeral towels, I remember Machi (the way we used to call my maternal grandma – a diminutive of the word “maica” used for grandmothers, meaning ‘old mother’) giving me instructions about which scarf or towel should be given to whom after her death. She often asked me to light candles for her and to cry at her funeral, somehow training me as a child to imagine how my life will continue in her absence and how, ritually and emotionally, I should face my encounter with her death: acknowledging the pain that her death would cause me, but grateful that this came during her old age so she could die prepared and believing that this is yet only one step in her continued existence in another world. In rural parts of Romania, growing up as a child is intertwined with the process of the ageing of their caretakers, the discourse of dying well, the performance of funeral rituals and being taught to manifest personal and cultural grief.

Sometimes I wonder, just as Jason Danely pointed out in the first essay of these collaborative posts, whether my interest in the anthropology of death and dying would have been the same in the absence of this early learning about death from my grandmas. The following years of education and research seem often as if they just added further structure to my approach of a subject I was initiated into by the elderly people around me ever since my very first years of existence.

I would like to thank Jason Danely for his invitation to write for these collaborative posts and also for his and Elise Berman’s helpful comments, suggestions and assistance.

Ariès, Philippe (1974). Western Attitudes toward Death: From the Middle Ages to the Present. Baltimore and London: The Johns Hopkins University Press.

Corr, Charles (2000). “What Do We Know About Grieving Children and Adolescents?”. In Living with Grief – Children, Adolescents, and Loss, edited by Kenneth J. Doka, 21-34. Hospice Foundation of America: Brunner/Mazel – Taylor & Francis Group.

Cristina Douglas is a PhD candidate (awaiting examination) in cultural anthropology at the University of Bucharest, Romania. Her main interest is focused on the anthropology of death and dying in relation to cultural transmission, representations of good/bad death and beliefs in immortality. Recently, she focused on researching the New Zealand institutional settings for the dying (end of life and palliative care). Currently she works in two projects: one dedicated to the imaginary of (shameful) death, diseases and hygiene in the political discourse of anticommunism, and another one that explores the medical learning of the body through the use of cadavers.