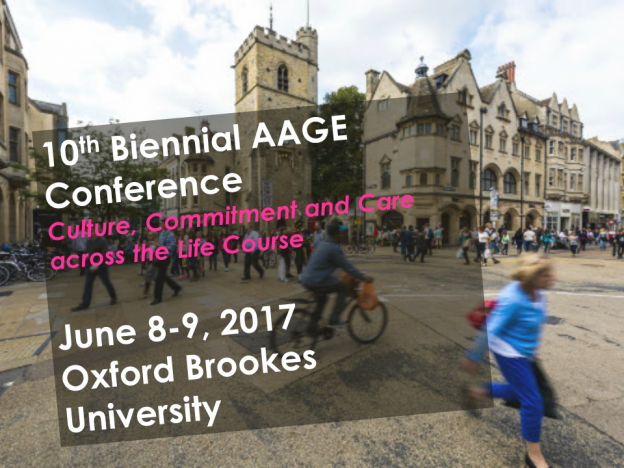 I arrived at the AAGE conference in Oxford unsure of what to expect. I was a few thousand miles from home, standing likewise on foreign intellectual terrain. Despite my involvement in death studies, I am a comparative religion scholar in training, and I have only recently begun immersing myself in anthropology. However, any initial hesitation was quickly replaced by a mounting eagerness to engage with the ideas and conversations that swirled across our swift and brimming two-day schedule.

The first panel I attended featured fascinating work in religious anthropology and aging, providing an ideal bridge through which I stepped into the proceedings. Professor Uchibori Motomitsu of the Open University of Japan discussed the Iban longhouse communities of Malaysia, describing the practice of providing ngibun, care, to the dying. This includes the mundane, which one community member likened to “feeding a corpse,” leading into post-mortem rites conducted in the open corridor of the longhouse. Hom Shrestha of Laurentian University gave an overview of the Nepalese Bura Janko ceremony, through which the elderly are elevated to the status of gods through a series chariot rides into the divine realm. Shrestha emphasized their power to strongly increase the psychosocial well-being of seniors, urging such practices to become more widely integrated into elder-care. These papers pointed to the influence that imaginative and ritual foregrounding can have on end-of-life processes and attitudes, affirming the potential for further inquiry into aging, dying, and religion.

I was in very good company during my panel, playfully dubbed the “death panel.” Iza Kavedzija of the University of Exeter offered a meditation on gratitude in the lives of Japanese elderly, observing that in conversation, expressions of gratitude were often preceded by a space of silence. She concluded by noting that although gratitude points directionally toward the past, it is experienced in the moment, opening affective possibilities in the present. Heekyoung Kim of Seoul National University expanded on the topic of Japanese aging, discussing the methodical preparations for death undertaken by healthy Japanese adults. This, Kim explained, has the effect of transforming death into a necro-social project with a long process, rather than a singular event. Natashe Lemos Dekker of the University of Amsterdam addressed the legal limitations faced by dementia patients seeking euthanasia in the Netherlands, in which euthanasia is understood as a request rather than a right. She left open the question of whether euthanasia is sought out as an act of desperation, or as a way out of desperation. I was grateful for the enthusiastic feedback I received on my paper about the rising role of death doulas in the aging western world. In addition to having the privilege of meeting a formerly practicing death doula among the attendees, I was pushed to further investigate how such services break down across class lines and in different geographic areas.

[scholars] were immensely helpful, sharing their own experiences in the field and encouraging me to pursue my research further

In a panel focused on intergenerational dynamics, Nancy Burke of University of California, Merced, used the awe-inspiring murals of JR and Jose Parla, depicting the elderly upon crumbling facades in Cuba, to convey its changing healthcare system. These images became the backdrop–or in her Bakhtinian parlance, the chronotype–for the comments of elderly Cuban civilians, such as, “we live like slaves and we die like kings,” or, “I can see the doctor whenever I want. But once I get there, he has nothing to give me.” Fayana Richards of Michigan State University described how African American grandmothers, who often took their personal relationship with God very seriously, regarded church as a seed to be transmitted to their grandchildren. For these women, faith could provide a way out of street life by carrying the possibility of change at any moment.

In addition to some very sobering truths, the AAGE had a great deal to give us, the conference-goers. Alongside coffee-breaks, meals, and a very pleasant wine reception, I was treated to genial company and brilliant conversation. I was impressed and heartened by the scholars I spoke to, all of whom were deeply involved with the issues they studied. They were immensely helpful, sharing their own experiences in the field and encouraging me to pursue my research further. The possibility of future collaborations emerged, as well as suggestions for like-minded journals where I might pursue publication. I left with the sense of having tapped into a network of supportive and passionate people that are leveraging theory and community engagement as a means for social change.

Michelle Bentsman is currently an M.Div. candidate at Harvard Divinity School. Her areas of focus include end-of-life care, ideologies of death and dying, and comparative religion, with a particular emphasis on Judaism and Hinduism. She has worked in a north Indian hospice, where she collaborated with doctors, nurses, and volunteers to develop a spiritual care program, as well as served with an NYC Chevra Kadisha (Jewish burial society). She recently co-published an article on embodiment and the unknown in the Performance Research Journal.

One thought on “Finding community far from home: A student report of #AAGE2017”