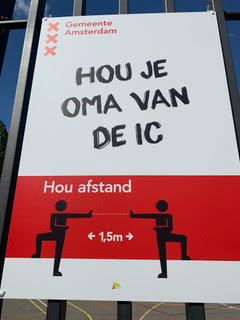 This blog post is based on a phone-based qualitative interview project in the Netherlands. During April 2020, we interviewed 59 seniors about their experiences during the COVID-19 crisis and their views on the portrayal of senior adults in the national media. The participants were between the age of 54 and 95 (M=75), living throughout the Netherlands, both independently and in nursing homes. To illustrate our findings, we used quotes from some of our interviewees[1].

Shortly after the massive outbreak of COVID-19 in Italy, the Netherlands reported its first case on the 27th of February 2020. Roughly two weeks later, the first nationwide restrictions to mitigate the virus were announced; people were asked to work from home as much as possible, to stay at home as much as possible, schools, restaurants and gyms closed their doors, and events were cancelled. Although social life was practically halted, the Netherlands has never been in total lockdown since COVID-19 broke out in February – contrary to most of Europe (or even the world). Rather, the country has followed a so called ‘intelligent lockdown’ (1), which meant that public transport remained in service, most stores kept their doors open, and people were still allowed to leave their homes when they felt it was necessary, the latter being open for personal interpretation.

However, certain groups, older adults (defined as 70+) and those with underlying health issues were strongly pressed to stay indoors and refrain from social contact with people outside of their household. At the time, the government seemed to suggest and hope that the intelligent lockdown would create what is now commonly known as group or herd immunity, as only ‘healthy’ people (i.e. young and fit) would be infected with the virus while ‘protecting’ the weak. Such an approach, so the logic seemed to be, would limit social, economic and psychological costs of mitigation measures.

This principle of ‘protecting the weak’ became widespread not only through the national media but also confirmed in the words of the Prime Minister, Mark Rutte, who stated: “I would like to tell you [seniors and those with underlying health issues] that our absolute priority is to minimize the risks for you” (2). Moreover, he made an appeal to the young and healthy citizens to follow the restrictions not only for themselves but mainly for “our older people”. In response, media outlets started to portray seniors as an particularly vulnerable group and, at the same time, reported widely on the growing ‘solidarity’ of younger generations who were expected to minimize their social contact for these ‘vulnerable people’ (3) and help out those in need: the older people and the weak.

Although probably meant with the best intentions, the ever growing attention to the situation of older individuals, and further emphasized by the sparked solidarity from younger generations, many seniors did become more conscious of their so called ‘vulnerable position’. Peter, aged 75, reflected: “the corona crisis did make me aware that I am more vulnerable now than younger people, because of my age. I am part of the risk group”.

At the same time, many other interviewees did not recognize themselves in the unambiguous and generalizing image of ‘older vulnerable people’. As also stated by Susan, aged 73: “I do not feel addressed when they [media] talk about older people. Yes, I understand that they have to focus on older people because of the risk, but no, I do not see myself as old”.

The discrepancy between the portrayal in the media of older adults being ‘vulnerable and at risk’ and one’s own perception of ‘not feeling old’ and the paradox Susan also describes of belonging to a risk group while not identifying as such, became even clearer to us when we discussed with participants how they dealt with the measures taken specifically to ‘protect them’ during the intelligent lockdown. Multiple seniors experienced internal conflict in assessing which measures applied to them, and how they were to adhere to them.

For example, many would like to go out for a walk or bike ride, but some felt insecure or anxious as the government had urged them to stay inside as much as possible. Charlotte, aged 72, reflected on this by saying: “Rutte says ‘stay at home’, so when I do go out, I feel guilty. But on the other hand, I don’t meet anyone, or yes, they fly by on their bike, but I don’t think that the virus will hit me on the bike”. Like Charlotte, several interviewees tried to manoeuvre between the measures set by the government, their own health perception and a self-determined risk of becoming infected.

As outlined above, most of the solidarity during the COVID-19 crisis was expected to come from younger generations and the emphasis was largely on the ‘sacrifices’ of the young. During our interviews however, we noticed that solidarity was not a one way street but went both ways.

Contrary to the regular and frequent stories in the media of lonely, isolated and vulnerable individuals, most of our older participants would not portray themselves as those who were hit hardest by this crisis. Instead, they felt that younger people, who were losing their jobs and were forced to stay inside to protect the old, were hit harder by the pandemic and needed support and help, as Gill, aged 80, explained: “the mental damage inflicted on people, who are now unable to work and become stressed because they don’t make money. This can’t go on, they [government] should say that older people should stay inside as much as possible and that young people can resume their lives”.

Some interviewees described that COVID-19 actually pointed out ‘new vulnerable groups’ such as small business owners or younger generations and worried about the future of these groups. Leo, for instance, was afraid that a longer lockdown would have a great effect on education: “I worry about my grandchildren, if they receive enough education now so that they do not fall behind in their education later. I hope that schools will start again, I don’t mind staying inside, but let them start again”.  Similar to Leo and Gill, several seniors stated that they would be happy to stay inside (a bit longer) if that meant that younger generations and the economy could start again.

The issue of vulnerability and the need for solidarity between generations was further drawn out when, several weeks into the intelligent lockdown, a statement was put forward saying that, in the worst-case scenario, people above a certain age would no longer be admitted to the intensive care (4). This made many participants reflect upon their personal health and that of others.

Some participants, including Susan, told us that they would like to be admitted to the IC no matter what. Yet others stated that they would be happy to give up their intensive care bed to a young person with a family when the situation would arise. Leo, for example, told us: “I have lived my life, I would not want to go to the IC, give my bed to someone else”. And Margot, aged 72, said: “if there is a choice between me and a young person who still has a family, in terms of staying alive, well, I don’t mind if they choose him or her over me”.

The stories that we gathered do not only show the heterogeneity amongst senior citizens but also that solidarity during crises such as COVID-19 is not a one way street and does not only come from younger generations. Instead older adults who are often portrayed during this crisis to ‘be vulnerable and in need of help’ also feel that they can help and support younger generations. This goes to show that rather than solely focussing on the possible vulnerability of older adults, we should highlight their strength and willingness to contribute to society and acknowledge that solidarity is always a mutual endeavour. Rather, it takes two to tango.

[1] All names in this blog are anonymized and pseudonyms.

Jolanda Lindenberg, PhD is a socio-cultural anthropologist and senior researcher at Leyden Academy on Vitality and Aging. She has a PhD from the Max Planck Institute for Social Anthropology in Halle/Saale, Germany. At the Leyden Academy, Jolanda leads the activities in the focus area Connected, and researches social networks, group identity and identity formation of older people. Besides research Jolanda is also involved in developing, coordinating and teaching various courses for older adults, professionals and graduate and under-graduates.

Miriam Verhage, MSc is a junior researcher at Leyden Academy with a research master in Cultural Anthropology from University of Utrecht. At Leyden Academy Miriam researches the influence of social welfare initiatives on the well-being and social networks of the older adults in the Netherlands. Furthermore, Miriam has been involved in qualitative research on the image young people have of older adults after intergenerational contact.

Lucia Thielman, MSc is a junior researcher at Leyden Academy with a master in International Public Health. Her research focuses on interactions between older adults and youth. She is also involved in research and projects that focus on the relations between care professionals, older individuals and informal caregivers. Besides her work at Leyden Academy Lucia is invsolved in research at the Vrije Universiteit in Amsterdam.

Lieke de Kock, MA is a junior researcher at Leyden Academy. She works on a participatory research project ‘Art in long-term care’ in which she studies the impact of art on older adults in long-term care. In her project she uses diverse methods and seniors are actively involved as co-researchers. Lieke has a Master of arts in theatre studies and a bachelor in social work. Before coming to Leyden Academy, Lieke worked as a care provider at a care organisation in Ede and as a geriatric activity therapist in a hospital.

This is the seventeenth post in The Age of COVID-19 series, co-edited by Celeste Pang, Cristina Douglas, Janelle Taylor and Narelle Warren. Please send your contribution to Narelle.Warren@monash.edu

One thought on “It takes two to tango”