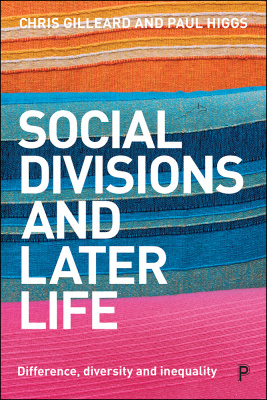 In Social Division and Later Life: Differences, Diversity and Inequality, Chris Gilleard and Paul Higgs (2020) emphasize the increasing heterogeneity of a growing group of older adults, here looking through the lens of social divisions to interrogate the diversity of later lives. At large, they reiterate the importance of including – or rather not excluding – age and aging in both social theory and social sciences in general.

Both social divisions and differences are explored in the text using social differentials like gender, class, and ethnicity and race. While the former emphasizes the objective structural differences (i.e., position and hierarchy), the latter focuses on the process of subjective identification and belonging. Additionally, the body, which has previously been largely ignored in social scientific work on aging, with health and frailness viewed as a natural outcome of social divisions (Gilleard and Higgs 2017), is now studied as both the site and the source of these divisions (v) rise of disability movements has made the ‘body’ more salient in these discussions (Gilleard and Higgs 2014). The authors use these differentials not only to denounce the effect of for example class differences on aging well, but rather analytically, to make sense of the diversified nature of old age. Against the backdrop of increased life expectancy, the authors view the phenomenon of old age as both the product of social divisions and as a socio-demographic reality, which reworks and reframes understandings and aspirations of earlier life. At the same time, according to the authors, these social divisions confer unequal access, opportunities and constraints to older adults (4), which are often constructed, just like social facts[i].

The four core chapters of the book discuss the social differentials of class, gender, ethnicity and race, and finally, disability. The latter half of the book focuses on intersectionality as a viable analytical tool to study the workings of these social differentials in later life. Chapter 2, “Social Class and Inequality,” discusses class as a zombie category: i.e., dead but still living amongst us. The authors propose alternative, more historically contingent approaches to ‘class difference’ focusing on consumption, identity, and lifestyle, and introduce Bourdieu’s habitus, thus shifting the focus from hierarchy-based divisions to more cultural framings. They conclude with a brief discussion of how the introduction of the universal basic income (UBI) has rendered class differentials problematic. Without going into much detail, the authors have overlooked the uneven provision of UBI across the world in their analysis. For instance, in India, UBI continues to be in its formative phase and far off from implementation. At the same time, class continues to be a major determinant in the aging process. In fact, the idea of “Third age” has a strong class grounding in the Indian context (Samanta 2018).

this book brings to our attention how later years are as much about difference and diversity as they are about exclusion and inequality. This requires us to recognize the potential richness that arises from the performative multiplicity of varied aspects in later life.

Chapter 3 discusses gender as a “structural social division, a source of inequality that runs throughout the adult life course” (41). Along with discussing different strands in feminist research, the authors elaborate on the ways in which gender contributes to “later life’s inequalities and injustices,” and also point out how it “adds to its complexity, richness and diversity” (66). The overall shift in the social sciences and humanities from ‘structural inequalities’ to a focus on ‘identities and subjectivities’ is emphasized by the authors. This phenomenon has been studied through the lens of the cultural turn in social gerontology (147; Twigg and Martin 2015), along with the changes from first to second modernity. However, Gilleard and Higgs limit their discussion of inequalities in gender to the strict binaries of male and female and scantly touch upon the same sex couples/households.

Chapter 4, “Ethnicity, Race and Migration in Later Lives,” is based on previous empirical research from the UK and the US and provides a detailed theoretical analysis of race and ethnicity in later life. Both differentials play an important role in structuring these social divisions, which are inseparable to those in positions of power (70). At this point, the authors include a brief discussion of the composite process of migration relevant to ethnicized and racialized divisions that contributes to the complexities of later lives. Gilleard and Higgs do not always see this differentiation as detrimental to group solidarity; they see ethnic and racial divisions as ways to foster a sense of community as people within and across generations attach themselves to their specific group identities. The book interestingly raises the issue of the often-neglected aspect of the narrative performance of ethnicity. Using the lens of performativity, allows us to cast new light on differences, identity and lifestyle in later life while “illuminating ethnicity as a social location and social identity whose meanings differ with age” (91). The importance of recognizing social differentials such as gender, class, ethnicity and race, and disability has been reiterated in all chapters, illustrated in particular with examples from the Global North. I believe this discussion would benefit substantially by providing evidence from the Global South where the adverse effects of social differentials are widespread.

Although stable social divisions (95) can be understood through variation across differentials, identities and processes of subjectification remain fluid and particularly anchored in bodily appearance and physical functioning (Gilleard and Higgs 2015). Chapter 5, thus, deals with the corporeal markers of illness, impairment, or infirmity, emphasizing “the greater degree of inter and intra-subjective negotiation and re-positionings in late modernity” (97). Due to the compounding effect of disability and age, the authors discuss the incompleteness of using disability theory in considering the corporeal differences in later life. Chapter 6, “Identity and Intersectionality,” places greater emphasis on the increased diversification of later lives, particularly among third agers. The contours of a new aging imaginary are most evident among the baby boomer cohort whose “consumer habitus continue to expand” (123). Using intersectionality as a methodological framework, the authors work to further demarginalize particular groups, in social gerontological research, and – ideally – in everyday practice. Furthermore, this allows us to evade the binary structures of our discussions and thus revisit the dualism (i.e., structures and subjectivity) that pervades the social sciences. In fact, social reproduction and cultural participation have become key concerns to researchers, allowing them to articulate relational identities and shift away from a discourse on frail, dependent and powerless older adults towards one on more agentic individuals.

In a closing chapter, this book brings to our attention how later years are as much about difference and diversity as they are about exclusion and inequality. This requires us to recognize the potential richness that arises from the performative multiplicity of varied aspects in later life. The book is succinct in its discussion, citing a plethora of useful literature, and straightforward in its layout. The objectives are clearly laid out and impetus is placed on detailed theoretical discussion. As such, it will be useful for scholars interested in the social sciences in general and in the later years of the life course in particular. With the growing differentiation of particular forms of later life, this book definitely sets the stage for more discussion along these lines. Like much of Gilleard and Higgs’ previous work, it will be useful in teaching the foundational understandings of a wide range of older adults’ experiences. Moreover, this unquestionably pushes researchers to think about how later years are – and will keep – diversifying in societies across the world.

[i] Social facts are values, cultural norms, and social structures that transcend the individual and can exercise social control (Durkheim, 1982).