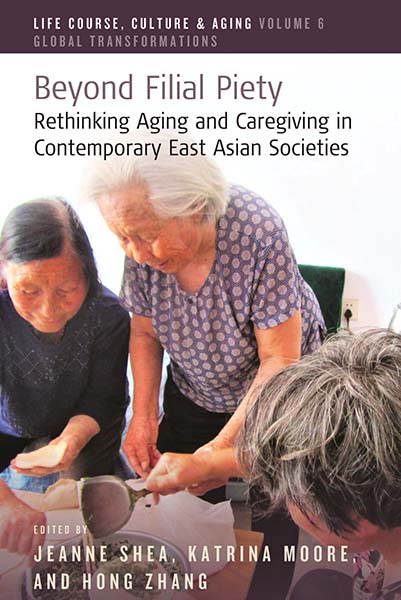 Jeanne Shea, Katrina Moore, and Hong Zhang’s edited volume, Beyond Filial Piety: Rethinking Aging and Caregiving in Contemporary East Asian Societies, brings together qualitative studies that address the social and cultural transformations of aging and caregiving in East Asia. As the editors state in the introduction, traditional Confucian ideas of filial piety that prescribe adult children to fulfill their obligations to respect, obey and care for their elderly parents have become increasingly more difficult to put into practice, given the unprecedented acceleration of population aging in East Asian societies (2020, 1).

This volume engages in a constant dialogue with Charlotte Ikels’s (2004) Filial Piety: Practice and Discourse in Contemporary East Asia. Shea, Moore, and Zhang discern important continuities with the findings in Ikels’s volume about the ways in which, in this geographical area, demographic change and welfare transformations continue to affect care practices and support for the aged as well as challenge the understandings of filial piety and obligations toward old age within communities, families, and individuals (2). However, the editors also note that a decade and a half after Ikels’s collection, “much has changed in demographic, social, and public policy terms” (2). With respect to the demographic transition of Western Countries from aged (14 % elderly) to super aging societies (21 % elderly), that of East Asia has increased even more rapidly (17). In response to this demographic trend, the editors aim to update relevant ethnographic material by including geographic locations such as Hong Kong, Taiwan, and Singapore, in addition to China, South Korea, and Japan. The contemporary socio-demographic reality additionally necessitates the editors to give proportional scholarly attention to research that deals with care for and by the aged “whether for themselves, their spouses, or their children or grandchildren” (6). Moreover, increasing possibilities for nonfamilial options of eldercare, both government and market driven, also need to be considered because they impact the practice and imaginary of good care and aging (6). The present collection expands Ikels’s (2004) work into a new research area that combines more geographic locations and recent changes in terms of practices and values toward aging and caregiving in East-Asian societies.

Methodologically, the book engages with aging and caregiving through mixed methods and ethnographic approaches, to provide additional qualitative data to the massive research conducted on a macro-demographic or policy level (10). The authors in this volume are concerned with bringing together the macro-level of demographic changes with the micro-level of everyday lived experiences which are documented through participant observation, interviews, and popular and media representations. The theoretical frameworks adopted throughout the chapters include classical anthropological and sociological perspectives of interpretivism, critical theory, globalization theory and social constructivism. The volume also incorporates approaches from social gerontology, such as the life-course perspective, age-stratification theory, and exchange theory (10-11). Additionally, some research draws on feminist approaches to show how many contemporary East Asian societies are increasingly moving toward gender equity and neutrality (e.g., Chapters 2 and 3). This methodological and theoretical orientation allows for a very dynamic and textured account of aging and caregiving from differently situated perspectives (e.g., caregivers, cared-for, health practitioners, grandparents, spouses, children, grandchildren, migrant workers, transnational families, and communities), oscillating between individual biographies and molecular accounts of family and community life and social structures and policy-making processes.

The book is divided into three macro sections according to specific cultural areas, but all the parts describe socio-cultural contexts rooted in Confucian traditions of filial piety. Part I, “Aging and caregiving in Chinese Contexts” (Chapters 1-6) engages with aging and caregiving in China. This part includes Youcai Tang and Jeanne Shea’s exploration of the “Jianxiang Model”: an experiment in community-based care for seniors to solve the problems of old-age support in rural areas (Chapter 1). In these areas, that have the highest proportions of senior citizens and the lowest levels of economic prosperity, the “model of Jiangxiang” succeeded in reviving collective agriculture and establishing free senior cohousing to provide material support and care for elderly people. These programs also achieved higher levels of life-satisfaction in the elderly population and in fostering positive bonds between adult children and their aged parents, precisely because they went beyond ideas about seniors’ dependency and filial co-residence that were declining anyway (64). Leng Leng Thang and Kalyani Mehta (Chapter 5) share the results of a study on grandchildren’s perceptions of caring for grandparents. Their chapter starts with the description of a controversial state-sponsored film about filial piety in Singapore. The film was meant to restore feelings of filial piety in Singapore’s next generations by narrating the story of a son watching his father who tenderly cared for his grandmother affected by dementia (142-143). Thang and Mehta illuminate how many young people in Singapore demand the government to take on more responsibility when it comes to elder care programs. They still see filial piety as an aspiration, but face their limits in fulfilling it due to a heavy workload, hefty medical costs, and high costs of living (Chapter 5).

In Part II, “Aging and Caregiving in Japanese Contexts” (Chapters 7-9), Susan Long and Ruth Campbell examine the changes in the meanings of family caregiving in Japan after the establishment of the national long-term insurance care (LTC) system (Chapter 9). The two researchers criticize biomedical notions of caregiving burden and advocate for a conceptualization of caregiving that embraces variations over different stages and historical changes in cultural ideas about care (242-243). The “caregiving career” concept allows them to explore the meanings contemporary Japanese family caregivers give to care activities in relation to the illness trajectory, including how caregiving still continues after the death of the people cared-for (243). Finally, Part III is dedicated to Korean contexts (Chapters 10-12). In Chapter 10, Hyun Ji Lee and Kyong Hee Chee state that the institutionalization of eldercare through the LTC national program has effectively changed the idea of filial piety. Many caregivers declare no longer feeling guilty after having entrusted elderly family members to a nursing home, as the number of LTC facilities has increased nowadays. The authors also report that many family members believe that trained and certified LTC workers may provide better care than them. Chapter 11 focuses on a group of South Korean seniors who were repatriated from Sakhalin Island, where they were sent to serve as laborers during the Japanese occupation of Korea in the 1930s and early 1940s, and then retained after the island came under Russian control. In this chapter, Dorota Szawarska examines the intergenerational and family tensions brought by repatriation programs as well as the discriminatory behaviors directed toward Sakhalin elderly migrants. The ambivalence of caregiving and filial piety are well exposed in her work, as she deals with the dynamic conflict of being responsible for caring for parents and children at the same time.

This volume is an extensive collection of ethnographies and qualitative studies. As the editors note in the conclusion, there are certain limitations to the book’s content; the studies were not able to acknowledge the transformations caused by the COVID-19 pandemic and do not address the full range of diversity within the contexts examined. This includes care and aging among LGBTQI and minority groups (387). However, the collection successfully challenges the popular and academic romanticization of filial piety and caregiving in the East (Buch 2015; Sivaramakrishnan 2018) and also contributes to revealing the ways in which elders, families, and communities can reimagine traditional cultural values and actively respond to population aging. For this reason, I would recommend it to students, researchers, and practitioners in many fields, including East-Asian studies, social research on kinship and caregiving, anthropology of morality and ethics, anthropology, and gerontology.