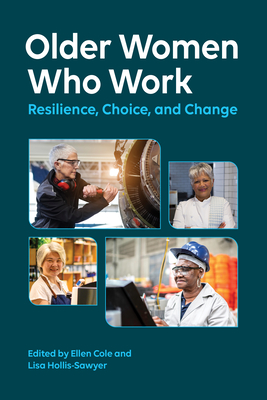 The question “When will you retire?” is replete with social, economic, and cultural norms and expectations about the life course and its transitions. The edited volume, Older Women Who Work: Resilience, Choice, and Change, is about women who delay this transition and thus disturb imaginaries of working life, gender, and aging. The book, edited and written exclusively by female scholars, is the latest addition to the American Psychological Association’s Society for the Psychology of Women (Division 35) Book Series. Due to changing demographics and the relative longevity of women, the ‘silver workforce’ is increasingly female. Nonetheless, women 65 and older who continue to work are an overlooked group. Older Women Who Work accounts for their experiences and gives them a voice. It introduces us to the diversity of women who are delaying retirement, covering topics such as resilience, lifespan development, meaning-making, identity, motivation, civic engagement, and economics, to name but a few. The tone is inclusive and personal, inspired by storytelling and (auto)ethnography and, apart from some notable exceptions, methodologically situated in qualitative research traditions.

The thirteen chapters are divided into three parts, each with its own introduction. Part I, “Personal and Career Identities for Older Women,” has five chapters that deal with older women’s self-perceptions as related to later life work trajectories. The four chapters of Part II, “Societal Roles of Aging Women Workers,” examine women’s roles in the workplace and in their communities, and specifically how they balance and navigate these roles. Part III, “Diversity and Personal Grit in the Workplace and Beyond,” acknowledges the diversity of the female workforce and the individual differences between women living in different cultural, geographic, and socio-economic contexts, that can contribute to health disparities.

In Chapter 1, Ashley M. Stripling and Jodie Maccarrone combine resilience research with the concept of successful aging in the workplace to propose an original model that explains resiliency in the workplace as experienced by older women. This model acknowledges various stressors and challenges that women face in the workplace, for instance, bullying, interpersonal conflict, work overload, work-family conflict, and gender bias. Usually, women can transcend these challenges by activating their resilience pathways. Stripling and Maccarrone suggest evidence-based training for those who struggle with the resilience process and stress the importance of addressing the non-supportive environmental factors within the organization.

Chapters 2 and 3 draw on different lifespan developmental theories to explain the meaning of work for women in late adulthood, recognizing that our perspectives and choices diverge at different stages of life and regarding work. Valory Mitchell (Chapter 2) describes how people who work in later life have the potential to generate things that may outlast them and serve to support other people. Women also progressively learn how to include themselves in their circle of care to reflect their needs better. Whilst gerotranscendence is mentioned as a part of this developmental process, I felt there was a lack of specific reference to Tornstam’s (1989, 2005) theory. This would have certainly added to the academic rigor of the argument.

In Chapter 4, Nicky J. Newton and Katherine M. Ottley are concerned with understanding the extent of women’s choice. I believe that their research explores two vital questions that might be at the crux of trying to understand older women who work: Are they forced to continue working or do they choose to do so? Are they forced to retire, or do they choose to? Newton and Ottley found that women who chose to either work or retire had higher levels of identity certainty than women who had less choice. Freedom of choice mattered, regardless of the outcome of the decision. The final chapter of Part I is an autoethnographic account by sociologist Jackie Goode in which she describes her lived experience of precarity work in British academia, which she entered comparatively late, and continues to inhabit post official retirement. This article highlights the strengths of autoethnography – a method that continues to face many criticisms from the positivists – documenting individual experiences in such a way as to raise issues that could apply to many. Goode describes one woman’s life story and how it connects to the lives of others. She offers not only a reflection of a personal story but also an analysis of a larger social, political, and cultural context in which this, and other stories, take place.

In Chapter 6, Mary Gergen and Ellen Cole provide us with ten biographical vignettes of women who have no choice but to work and who represent the group of the ‘secret poor.’ The vulnerable position of these women is a reminder of the socio-economic and political systems that fail some populations and result in 16% of women over 65 living below the poverty line (The US Census Bureau 2017). In contrast, Patricia O’Connor writes in Chapter 8 about women who continue to work despite being financially able to retire. One of the few non-US contributions in this volume is by Lorraine Radtke and Janneke van Mens-Verhulst (Chapter 7). They explore two contexts, Canada and the Netherlands, that are socio-economically similar as they can both rely on a relatively solid welfare state. For both countries, the authors review the relationship between work and other activities in a woman’s life, specifically how women negotiate many responsibilities and roles not only in middle age, but also later in life. In this context, they identify flexible working environments as essential if women are to be supported in preserving the work-life balance as they age.

Some of the articles also explore how ageism can go hand in hand with other -isms, such as sexism. For example, in Chapter 9, Ruth V. Walker and Alexandra I. Zelin look at gendered sexism in the workplace, considering both men and women’s experiences. While both genders experience ageism, the age at which women are perceived as ‘too old to work’ is generally lower than their male counterparts. The authors remind us that ageism also consists of benevolent discrimination, such as offering to take out someone’s trash because their physical abilities are believed to have diminished. In addition, in Chapter 12, Jasmin Tahmaseb McConatha and Frauke Schnell explore the cumulative disadvantage pertaining to race, class, immigration status, age, and gender, as experienced by older Latina workers in the US, who often face additional challenges as they age far from their home countries and families.

Throughout this volume, we are again reminded that ‘growing’ old is an ongoing process that allows and invites working women to find ways to continue making valuable contributions and to derive meaning from their unique situations. Since most of the material comes from the US, this book solely focuses on women in the US who are considered “Baby Boomers.”  It might be interesting to have some additional contributions from other geographical, cultural, and political contexts. I concede, however, that a more international review of this topic might be the scope of another book, yet to come.

Older Women Who Work: Resilience, Choice, and Change makes an important contribution to the discourse and research on working women from a women’s perspective. It provides research materials and practical insights that can benefit a wide professional and academic audience, including social workers, psychologists, social gerontologists, occupational scientists, healthcare professionals, and social science researchers, as well as undergraduate and graduate students in these fields. I hope the book will also reach HR managers, work consultants, and policymakers, so they can consider the real-life implications of some of their decisions, such as tolerating gender bias, labeling workers as ‘old,’ perceiving certain age-gender combinations as ‘poor investments,’ and failing to protect vulnerable groups of workers.