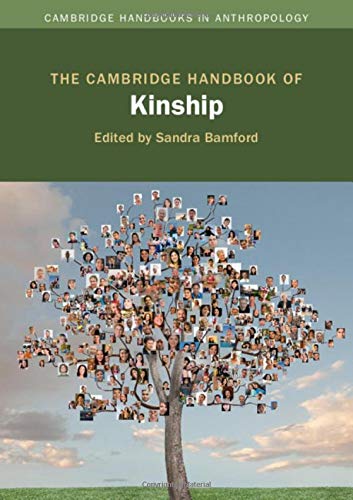 At its core, The Cambridge Handbook of Kinship, edited by Sandra Bamford, explores “how kin connections are imagined, formed, and administered in the twenty-first century” (5). The book consists of 6 parts and opens with three cases, focusing on issues of assistant reproductive technologies, of kinship and citizenship and of adoption and private rehoming of a child, thus immediately immersing the reader in the complexities of modern kinship and pointing out to some of the themes that will be dealt with in the rest of the volume.

Part I presents classical anthropological kinship theories from a new angle and analyzes the intellectual history of some of the significant anthropological concepts in this field. Gillian Feeley-Harnik (Chapter 3) scrutinizes the linkages between the notion of ‘descent’ and ideas of connection, selection, development and improvement. She deals not only with descent in the human world, but includes animal worlds as well, describing, for example, sheep breeding experiments in 18th-century Great Britain. Isabelle Clark-Decès (Chapter 4) studies the effects of the implication of alliance theory to South India, and Sarah Franklin (Chapter 5) pauses on different ways of thinking about ‘biology’ in the context of kinship studies. At the end of Part I, Janet Carsten (Chapter 6) suggests shifting from the very classical opposition between ‘biological’ and ‘social’, to questions of how kinship works, focusing on the importance of “stuff,” temporality and gradations of kinship. In sum, Part I provides the reader with the basic concepts in kinship studies, while raising new questions and indicating future directions for the field.

Further scrutinizing the cultural dichotomy between ‘biological’ and ‘social,’ Part II mainly argues not to reduce ‘biological’ to ‘reproduction’, and offers ways of balancing the ‘social’ and the ‘biological’ in localized and historically contingent ways. The body becomes a domain where the ‘social’ and the ‘biological’ merge, as it embodies, reflects, and materializes kinship relations. Kathryn E. Goldfarb (Chapter 7), observing the behavior of kids in child welfare institutions in Japan, describes how kinship, care, or its absence, are embodied in bodily practices. For example, the proficiency of using chopsticks is interpreted as ‘embodied signs’ of previous family relations. Drawing on another example, she asks: “Is being left- or right-handed biological? Is it cultural? Or is it an emblematic case of ‘local biologies,’ the result of dynamics across both domains?” (153). This is a pivotal question, and a most relevant starting point for studying our bodies and relations. Furthermore, Gail Landsman’s account of the role of technology in childhood disability (in Part V, Chapter 24) focuses on how an assemblage of bodies, technologies and people, redefines personhood and social relations of a person with a disability. In Part II, and throughout the volume, authors emphasize that kinship is deeply embedded in ‘biological materiality’ (154) and inseparable from it.

In Part III authors bring to the fore how cultural, political, legal and kinship orders are inextricably interwoven with, and foundational for mundane realities of kinship, established through everyday practices. Noa Vaisman (Chapter 12) tells one of the most dramatic and memorable stories in this book: during the dictatorship in Argentina (1976-1983) about 500 children – “living disappeared” – were transferred from their own families (their parents were murdered) to other families, where “their biological identities were erased, by changing their dates of birth, names and kinship ties” (279). Modern governments and nongovernmental organizations still try to restore the truth and return the “living disappeared” to their biological relatives but, as the author indicates, these processes raise a lot of questions that touch upon the sensitivity and complexity of the relation between kinship and state power. Does the Argentinian state have the right to intervene in people’s lives and forcibly reunite them with a family they never knew? Does the state have the right to collect a DNA sample of the “living disappeared” without their permission? Do these, now adults, have the right to refuse to undergo a DNA test? Do their biological relatives have the right to know the truth? Biological, social, political, legal and ethical issues get inextricably entangled and mixed up in these contradictory narratives. What is private? What is public? There is no answer, no border.

Part IV gives considerable attention to the role of migration in the context of kinship. Lieba Faier (Chapter 18) provides a rich guide to Japanese ways of living, exploring how Filipina female migrants become “oyomesan” (412) – traditional Japanese brides and daughters-in-law –  thus transforming not only their own lives and selves, but also influencing Japanese patterns of kinship. In the remainder of part IV, however, authors go beyond positive effects of transnational connection and focus on the precarious position of transnational migrants and their unstable kinship relations: Jessaca Leinaweaver (Chapter 17) calls attention to inequality and racialization in the context of transnational adoption and poses the question what ‘transnational’ means in this context; Nicole Constable (Chapter 16) focuses on the vulnerable lives of Hong Kong former foreign domestic workers and their families or “temporary family formation” (373), and Deborah A. Boehm (Chapter 19) describes how Mexican families are scattered across the US-Mexico border due to deportation from USA.

In Part V kinship is interwoven with technologies. Marcia C. Inhorn et al. (Chapter 22) call attention to the linkage between particular religious ideologies and types of permitted assisted reproductive technologies in Sunni Muslim Arab countries, secular Turkey, Shia Muslim Iran, and Jewish Israel. Other authors in Part V provide interesting insights into studies of surrogacy: Janet Dolgin (Chapter 21) examines the court cases of surrogacy and transformations of the notions of ‘mother’, ‘family’ and ‘childhood’ in this context; Elly Teman and Zsuzsa Berend (Chapter 23) focus on similarity between surrogacy practices in Israel and the USA, and Tsipy Ivry and Elly Teman (Chapter 25) analyze common cultural roots and mutually constitutive relationships between surrogacy and pregnancy in Israel.

Part VI thematizes the failed artificial distinction between the modern nation-state and kinship ideologies. As most authors here amply demonstrate, state and kinship are inseparable from each other: the ‘political’ intervenes in family lives and redefines kinship relations – through the carceral system, as Hollis Moore shows (Chapter 27) or through development programs, as Koreen M. Reece illustrates (Chapter 29). Furthermore, “the nation-state is frequently in tension with kinship and religion considered together, as an alternative … space for the making of persons and relations between persons” (711). In the same vein, Susan McKinnon (Chapter 26) describes how the image of cousin marriage is changed in Great Britain: from positive ratings, when this practice was still associated with aristocracy, to stigmatization, when it started to matter as part of British Pakistani Muslims kinship.

To conclude, I wish to highlight several themes that are compelling about this book and that run through the different parts. Authors bring to the fore, firstly, the importance of religion as the basis of kinship ideologies in modern states; secondly, the increasing role of the law in redefining kinship; thirdly, that particular forms of kinship can have both negative and positive effects, and fourthly, that information, whether its DNA tests or adoption documents, is becoming a new essential part or “stuff” of kinship. This elaborate volume will be of great value for a diverse audience interested in how inconsistent, competing and contested narratives merge in the domain of modern kinship.