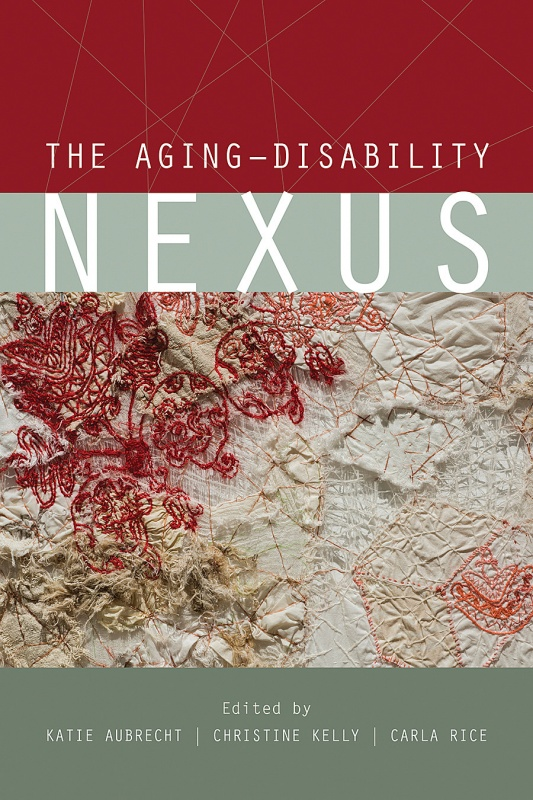 Diverse forms of physical and cognitive impairment are often considered a natural part of the aging process, yet at the same time, notions of ‘good’ old age—or successful aging—are considered only for those who succeed in avoiding impairment and falling into ‘old age’ (Gibbons 2016; Minkler and Fadem 2002). The relationship between aging, illness, and impairment is indeed complex (Solimeo 2008), making the recent publication of The Aging-Disability Nexus, edited by Katie Aubrecht, Christine Kelly, and Carla Rice, a welcome contribution to the distinct yet related fields of aging and disability studies. As the editors suggest, “creative and generative possibilities emerge when aging is situated in a disability politics and when interpretations of disability take account of the weaving of material, social, and cultural relations in and through which the meanings of bodies as young or old are made and unmade” (5).

Part 1, “Conceptualizing the Nexus,” presents a number of overlaps and intersections of aging and disability. The variety of topics that the four chapters in Part 1 engage illustrate that the nexus is not singular but that both phenomena are intertwined in multiple ways. Dementia has been identified as a particularly productive space to interrogate the fraught relationship between disability and aging: dementia is considered a disease of old age, but simultaneously as “an experience that is not a normal part of aging” (Silva, Cascio, and Racine 2020, 31) that can also befall people under 65, who are given the culturally specific diagnosis ‘early onset dementia.’ As important as is this distinction, it is equally important to pay attention to the compounding effects of ageism and ableism on older people with dementia. Lucy Burke (Chapter 2) critically examines the stigma of ‘uselessness’ for the old and disabled against the backdrop of a culture that idealizes productivity and efficiency. She provides a literary critique of two dystopian novels, The Mandibles: A Family, 2029-2047 by Lionel Shriver and The Unit by Ninni Holmqvist, highlighting dementia as “one of the most culturally powerful signifiers of unproductive or wasted life” (45). The section ends on a positive note, however: Monique Lanoix (Chapter 4) shows that the embodied experience of age and disability draws both parallels and possibilities. Through the creative expression of people with Parkinson’s Disease, normative ideas that one’s agency is only enacted through bodily and cognitive control are challenged, leading to the destabilization of both ageist and ableist assumptions of normality.

Part 2, “The Politics of Care,” focuses on the structures and policies of institutionalized care and the possibilities and limitations within them. Margaret Oldfield and Nancy Hansen (Chapter 8) present the experiences of two women—Susan who aged with cognitive impairment and Helen who, through a dementia diagnosis, aged into cognitive impairment. This critical distinction—between aging with and into disability—is made throughout the book, with this chapter tracing, through poignant accounts, how conditions of care and possibilities of agency are influenced by their diverse circumstances. For example, while power was exerted over their lives in similar ways, Susan was, for a time, permitted to live in a group setting, while Helen was moved directly into a nursing home after her diagnosis. This difference, the authors note, illustrates one of the consequences of dementia being considered a ‘disease of old age’ rather than a cognitive disability.

In Part 3, “Timescapes and Landscapes,” contributors move outside of healthcare settings to explore the intersection of age and disability in various places and temporalities. From May Chazan’s (Chapter 13) reflection on the impact of HIV/AIDS, age, and disability on the roles of older women caregivers in South Africa to Nathan Kerrigan’s (Chapter 14) exploration of social exclusion in the English countryside, the disparate settings of these final chapters reveal how pervasive and universal the intersections of age and disability are, if only we learn to recognize them. The final chapter is a dialogue between disability scholar Alison Kafer and age studies scholar Ruth Bartlett. Their exchange is anything but a conclusion, however, and instead invites continued dialogue beyond this collection. Notably, they remind us that talking about a single aging-disability nexus is far too limiting. They ask instead, “Does it not make more sense to talk about nexuses?” (253). Their exchange invites readers to think about how the categories of ‘age’ and ‘disability’ shift in different contexts, times, and in relation to other frameworks and concepts. For example, they ask how the nexus might change if we consider Julie Livingston’s (2005) concept of debility or how it would be conceived by gender studies scholars. I could not help but think what conversations this collection might have included had it been published in the post-pandemic world.

A significant takeaway from this edited volume is that the generally held expectation that old age brings with it physical and mental impairment has led to the depoliticization of the bodily and social realities experienced by older adults in this process. This book would be enjoyed by anyone focusing on topics that address aging and disability in any capacity. The writing is not overly academic, and the chapters both inform and inspire, making chapters an excellent addition to teaching resources on topics of age, disability, dementia and health policy. Scholars of the Canadian context will find it particularly relevant, however. For example, Christine Kelly argues (Chapter 6) that while disability activism has resulted in deinstitutionalization of people with disabilities in favour of other forms of community-based care in Canada, this has not been the case for older adults. Instead, elder care is almost entirely institutionalized in Canada, and overwhelmingly privatized (Armstrong & Armstrong 2020), the consequences of which have been tragically revealed during the COVID-19 pandemic where the majority of deaths have been long-term care residents (CIHI 2021). Paying attention to the nexus, however, illuminates yet another layer: 85% of people who live in long-term care homes in Canada have some kind of cognitive impairment, with the majority having dementia (Banerjee & Estabrooks 2021). The Disability-Aging Nexus offers both theoretical and practical tools to address inequities that have surfaced—and to reveal those still systemically buried—in order to create a more just later life for individuals who age with and into disability.

Canadian Institute for Health Information. 2021. The Impact of COVID-19 on Long-Term Care in Canada: Focus on the First 6 Months. Ottawa, ON: CIHI.