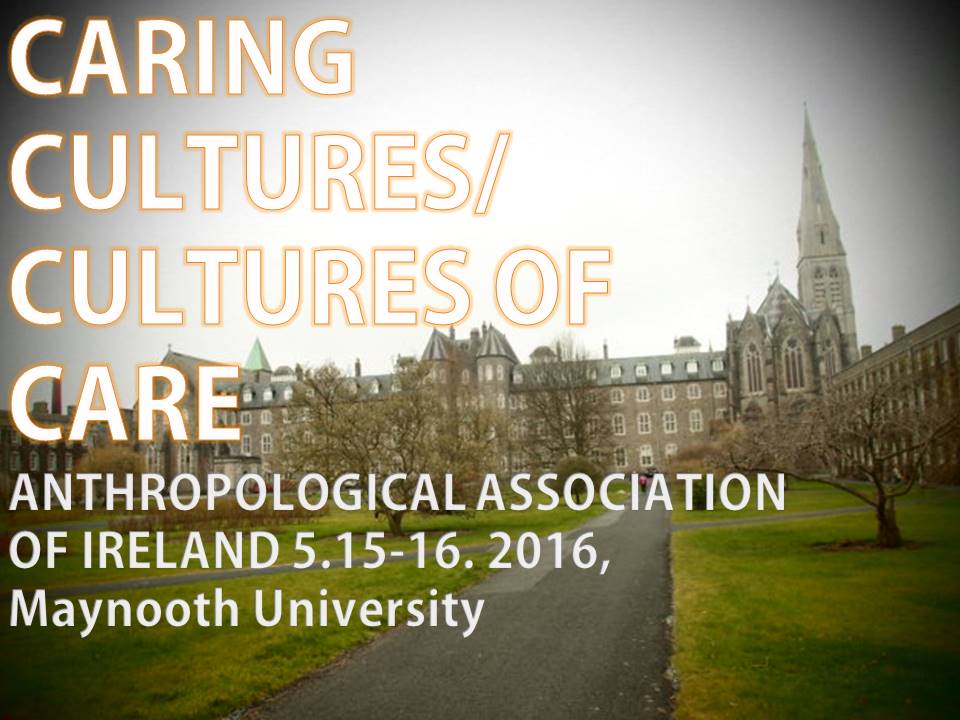 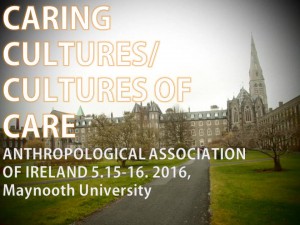 There is an old Irish folktale goes something like this:

A raven was carrying his chicks, one at a time, from an island to the mainland. In mid flight he asked the first, “Who will carry me when I am old and can no longer fly?”

“I will,” answered the young raven, but the father did not believe him, and dropped him into the sea.

The same question was put to the second chick. He too replied, “I will carry you when you are old,” and the father also let him fall into the sea.

The last chick received the same question, but he answered, “Father, you will have to fend for yourself when you are old, because by then I will have my own family to care for.”

“You speak the truth,” said the father raven, and carried the chick to safety.

Indeed, when it comes to the care of elderly people, tales like this one (not to mention the occasional controversial ethnography) don’t offer the most favorable picture of Irish care.  All the better then that the organizers of the 2016 conference of the Anthropological Association of Ireland (15-16 March) chose “Caring Cutlures/Cultures of Care” as their theme.
Maynooth University, a modern university on the grounds of a nineteenth century Catholic seminary, and the only Irish University with a Department of Anthropology, was the venue for this year’s conference. For two days (just preceding St. Patrick’s Day festivities), participants from across Europe gathered to engage with questions on the nature and significance of care in anthropology.
The conference did not explicitly focus on care of older people, yet it was telling that the keynote speaker was Prof. Arthur Kleinman (Harvard), who, while contributing widely to medical anthropology, has turned in his more recent work, to his personal experience of caring for his wife Joan. He cared for her for 10 years, during which she was also living with dementia. Reflecting on his experience, Kleinman argued that caregiving (and perhaps the care of older, ill, or disabled family) is central to humanity, and therefore should also be placed at the center of anthropology. In his keynote,  he presented a wide ranging discussion of care, from phenomenology and ethics, to art and ageing. He admonished what he felt was the “anti-humanitarian” effects of anthropological critiques on the politics of care, and particularly medical and international aid organisations. He chastised anthropologists for too hastily dismissing the real good that carers do, and encouraged us to consider ways to collaborate and improve care rather than stop at the point of our intellectual project of deconstruction.
Kleinman was not the only one at the conference to talk about care of the elderly. In fact, the number of papers presented on topics related to ageing and end of life care far outnumbered those on care of children or disabled persons. This swell of interest in ageing shows what an exciting moment this is for our field, and how powerful our work can be when brought together under a theme like care.
I began day 1 with two presentations on long term care. Resident community in nursing homes: A promising practice in the era of individualism? (Christine Øye, Bergen University College, Anne Karen  Bjelland (UiB), Gudmund Ågotnes, Bergen University College & Frode F. Jacobsen, Bergen University College). The authors described a small piece of a multinational study into the future of long term care, drawing mainly on ethnographic observations of resident interactions during meals. The authors brought up a theme that carried on throughout the conference concerning the tension between autonomy and collective engagement, particularly in care institutions. This was brought out most forcefully by Susanne van den Buuse (University of Amsterdam) in her paper The autonomy paradox: how promoting resident autonomy in a Dutch nursing home has a reverse effect, in which she described how Dutch initiatives to encourage older persons to embrace values of capability and self-reliance (bafflingly referred to as the “participation society”) resulted in role confusion, carer neglect, family resentments, and breakdowns in care. While many argue with the lack of personal freedom and dignity afforded in care institutions, these papers show how too much emphasis on autonomy leads to isolation and the moralised pressure to embody active ‘ageing’ that has its own damaging effects.
Questions of how to provide care for older adults and other vulnerable groups are particularly salient in an age of neoliberal governmentality and rapid technological advances. Together, both of these have contributed to models of care that privilege the role of the imagined independent, rational individual actor, deflecting responsibility away from public welfare institutions. While Annemarie Mol’s Logic of Care and Sharon Kaufmann’s Ordinary Medicine have been some of the most widely influential ethnographic accounts of this critique in recent medical anthropology, these and others draw on a much longer discussion on the relationship between individuals and the state that runs through political anthropology. Jacqui O’Riordan, Carol Kelleher & Feilim O’hAdhmaill, (University College Cork) and Anette Fagertun (Bergen University College, Norway) link this discussion to their work in Ireland and Norway respectively. Lived experiences of caring relations and interdependencies: Human orientation and moral reasoning as challenges to neoliberal rational thinking considered the ways insights from the ethics of care and feminist philosophy can offer alternatives to neoliberal subjectivity.  The anti-politics of Care in Norway: a theoretical discussion, Anette Fagertun pointed out how transformations in the kinds of knowledge used to shape and assess the effectiveness of care has at once depoliticised and “refamilialized”elder care.

In contrast to these more critical papers, there were several that highlighted the success of more grassroots, community focused, and holistic approaches to care. Amy Murphy, Cormac Sheehan, Chrizine Blackhorse, (University College Cork, The Crystal Project ) presented their work using a interactive drama techniques to collaborate with carers of people living with dementia (Pressure Play: forum theatre for carers of people living with dementia), and Andrea Kuckerg-Wöstheinrich (St. Augustinus Memory-Zentrum, Neuss, Germany) described how perspective taking is being used to make life better for people living with dementia in German long-term care (Changing perspectives – an institutional challenge in delivering qualitative good care for people with dementia). Dalia Zein, a landscape architect and anthropology Masters student at Central European University Hungary, highlighted the ways feminist architecture is easing unpaid care in Vienna (Infrastructures of Care: Tackling Unpaid Care Work and Ageing in Vienna’s Gender-Sensitive City Planning). Finally, Bodil Ludvigsen (University of Copenhagen) described how the ubiquity of the state in the everyday lives of Danish citizens is expressed through attachments and intimacy with home nurses. In her paper, Elderly people, home nurses, and relatedness, Bodil described how, far from being a target of resistance, older people living alone welcomed the benevolence of the state and felt empowered by its support.
My own paper, Wounded Worlds: compassion and vulnerability in narratives of unpaid carers of older adults in Japan and the UK, reported preliminary thoughts on subjectivity, emotion, and embodiment among family carers in two different cultural contexts. As Kleinman underlined in his keynote address, care is an excellent opening for conducting cross-cultural research, and my paper presented what struck me as overwhelming similarities between Japan and the UK when it came to the affects of care practices on the experience of self and the other. Ethnography of family care of the elderly is still an area that anthropology has much to contribute, and surprisingly few presentations ventured into the homes of carers or older adults.

There were many more presentations that I could not attend that will be of interest to AAGE members. I’ll just list some of them here, and urge you to get in touch if you want to know more.

Growing old together: Deafness and aging in the context of cutbacks in care Anja Hiddinga, Michou Benoist  & Madeleine Herzog, University of Amsterdam

Long-term Care in Spain: The Impact of the Economic Crisis on Social Policies and its Effects on Older Adults with Care Needs Blanca Deusdad, Rovira i Virgili University

The number of panels examining culture and care at larger conferences like AAA is growing each year, and lends credence to Kleinman’s assertion that care is not just a passing fad, but an emerging center for theorizing human life. Moreover, if this conference is any indication, those anthropologists who work on ageing will be at the forefront of this endeavor.