“There are worse places to spend a lockdown”: Privileged and at risk British retirees in Spain

In this latest contribution to The Age of COVID-19 series, Emma Fàbrega negotiates the concepts of privilege and risk to explore retirement migrants' experiences of geographic and social distancing.

Member of the Gender, Identity and Diversity (GENI) Research Group

It was a sunny Tuesday morning, at the beginning of March 2020. The dirt pétanque field in a Catalan coastal town was filled with English chatter about golf, gardening and the occasional Brexit reference. A new topic had infiltrated the conversation: COVID-19. As a group of British retirees living in Spain, most of the players were in their late 60’s and up to their 80’s.

“Remember! No handshaking and definitely no kissing!” said Jim, a 76-year-old man, theatrically, while preparing to elbow bump his pétanque partner. Between matches, it started to become evident that players didn’t pick up each other’s boules in sign of solidarity, like they would do normally. There were no hugs after wins either. And the weekly lunch didn’t recruit enough people to fill the restaurant reservation (Fieldwork Diary – Ref 03/03/2020).

This was the new reality that was slowly setting in amongst a small group of British retiree migrants in the Costa Brava. Between the banter and jokes, they were starting to come to terms with the fact that they were clearly an ‘at risk’ group when it came to the growing worldwide pandemic of Coronavirus.

COVID19 and its impacts on aging research

As a researcher investigating identity (re)constructions of Northern European retirement migrants in Spain, that sunny Tuesday pétanque meet was when I realized the great impact this virus would have on my field of study. Retirement migration in Spain is privileged in comparison to other migration trends in Europe; especially when considering the socioeconomic prerequisite it entails. However, when intersected with old age, British retiree migrants like the group above become more vulnerable than the stereotypes about them suggest.

This pandemic makes researchers who study ageing and migration, like myself, reflect on the importance of local support networks as well as access to local information during times of uncertainty. Despite the overall privileged experiences of some of the pétanque team players, who have villas with swimming pools, big gardens and sea views, there is a clear edge of vulnerability to their current situation. Not only are they far from their families but also they have become extremely isolated from the local Spanish communities they live in.

Insights from the field

In my fieldwork, this peculiar intersection between vulnerability and privilege began to rear its head that day in early March, when the looming threat of COVID-19 started to become a reality for these British retiree pétanque players.

“I live alone! How will I get by two weeks at home?” said Margaret to another player while talking about quarantine measures in neighboring Italy. Margaret was recently retired, divorced, and had arrived in Catalonia only a year ago. Her network of friends was limited to those in pétanque and a walking group, all who lived scattered along the coast. Little did she know that, only a week later, a state of alarm would be declared in Spain and this group would have to switch from extremely active social lives to being confined in their houses.

Last week, I checked in with Margaret to see how she was coping with quarantine on her own. Despite knowing a bit of Spanish, she was clearly misinformed about Spain’s measures on COVID-19. She didn’t know that you weren’t allowed outside in pairs, had never heard of the document you could fill out to justify your trips out of the house to local authorities, or that the state of alarm might be prolonged until May 11th.

On the other hand, she was extremely well versed on everything regarding Boris Johnson’s hospitalization. Towards the end of our FaceTime chat, Margaret realized that if she didn’t go out to the cafés, where she would flip through local newspapers while sipping on her morning coffee, her life in Spain was constructed in a way that she barely knew what was going on around her. In fact, she tells me that she doesn’t have any Spanish friends, and while she speaks to her family daily, she only has occasional calls from friends in the UK or friends in Spain, who are also British.

Despite living alone and feeling the empty void of her active social life, Margaret considers herself to be “one of the lucky ones”. With no serious illnesses or a dependent partner, living in walking distance from shops but still having a car, Margaret is aware that some of her pétanque comrades are having harder times in quarantine: “Jim needs new batteries for his hearing aid and doesn’t know where to get them now the local opticians is closed. On top of that, they have to live in [a] small apartment… the views are nice but they don’t get to move much. I’m definitely better off”, she remarks.

Margaret tries to stay positive and constantly posts pictures on her Facebook of her villa views. Her friends back in the UK post comments of envy while Margaret asks them about their families in quarantine with them. “There are worse places to spend a lockdown,” she writes in a post followed by heart-eyed emojis. 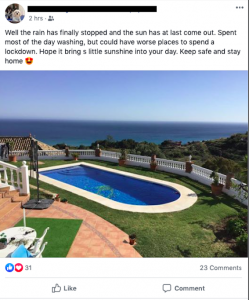 Having a villa is definitely a perk when in quarantine, but it doesn’t stop a worldwide pandemic. Even though Margaret and other British retirees like herself have a privileged lifestyle, the context of COVID-19 combined with their old age and lacking care networks, suddenly leave them in unexpected vulnerable positions.

Emma Fàbrega is an anthropologist working towards her PhD at the University of Barcelona, where she is part of the Gender, Identity, and Diversity research group (GENI). Her PhD explores ageing, migration and identity reconstruction in Northern Europeans retiring to the coasts of Spain.

This is our seventh post in The Age of COVID-19 series, co-edited by Celeste Pang, Cristina Douglas, Janelle Taylor and Narelle Warren. Please send your contribution to Narelle.Warren@monash.edu or Janelle.Taylor@utoronto.ca