Seeking manuscript proposals for publication in the 2013-2015 period. This can include both monographs and edited volumes. 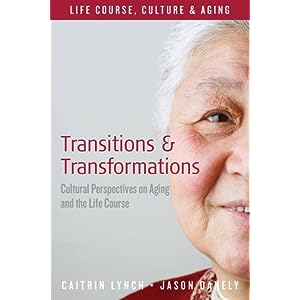 The first volume, TRANSITIONS AND TRANSFORMATIONS: Cultural Perspectives on Aging and the Life Course, Edited by Caitrin Lynch & Jason Danely is now in production and other volumes in various stages of development include: The Digital Life Course (edited); monographs on Dementia in India, Globalization of the Life Course in China and Resolving Generational Conflict in East Africa.

Focus of Book Series:
The consequences of global aging will influence most areas of 21st century life: the cultural construction of the life cycle, systems of care, generational exchange and kinship, the makeup of households and community, symbolic representations of midlife, elderhood and old age, and attitudes toward health, disability and life’s end. The volumes in this new series will address these issues from the perspective of the life course and mid/late adulthood set in a cross-cultural framework. It will explore the place of older adults in the changing cultural spaces, life scripts and elderscapes emerging within the context of a rapidly globalizing planet.

Potential authors should carefully look at Berghahn’s guide for authors and contact Jay Sokolovsky at jsoko@earthlink.net