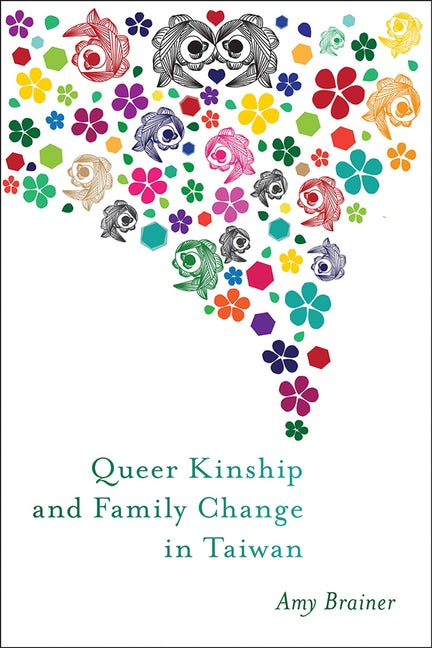 Amy Brainer has produced a provocative and concise ethnography on queer kinship in Taiwan. Through curated clusters of family vignettes, we meet T (butch) and po (femme) lesbians and their husbands, mothers, and brothers; we laugh as Deer’s grandmother confounds the neighbors with her cheerful acceptance of the beautiful woman who is her “grandson;” we feel the love of a gay son and his mother finding freedom in a family of two as they sing karaoke together for New Year. There are more stories, and they are well-told enough to appeal to students and activists and nuanced enough to speak to a broad audience of social scientists. Writing reflexively from the position of a white queer femme, Brainer’s emphasis on feminized kinship roles and queer family dynamics shows just how important queer Taiwanese are to their families without shying away from their vulnerability. While Brainer situates her analyses in queer studies and family studies, her life course approach to queer subjectivities and her attention to intergenerational queer kinship make this ethnography a necessary addition to the anthropology of aging.

It is easy to understand why this book won the Ruth Benedict Prize for outstanding contributions to anthropology on LGBT topics: Brainer’s documentation of queer relationships in Taiwanese families successfully challenges the models that have long framed queer subjectivity as a process of individualization. She starts with a major shift in the politics of coming out: away from a preoccupation with global homonormativity and towards a novel emphasis on changing parenting styles. Starting in Chapter 2, Brainer takes Carlos Decena’s “tacit subjects” (Decena 2011) and Fran Martin’s “tactical masking” (Martin 2003) to argue compellingly that queer “elders” and queer youth have such different perspectives on coming out because of a generational shift in norms of communicating family intimacy. In short, the younger generation of Taiwanese queers “come out” because their parents aspire to be very involved in their children’s personal lives, whereas queer elders employ strategic silences because parenting norms used to prioritize a quieter form of intimacy resting on tacit obligations. Although “queer elders” generally refers to adults in their thirties, forties, and fifties in this text Brainer includes a story that a T in her 50’s told about her mother, a T in her 70s, that provides a satisfying introduction to the existence and significance of older queer elders as well. Brainer’s anthropological inquiry into what constitutes “generation” in the context of queer subjectivities showcases the value that queer anthropology and the anthropology of aging can have for each other. This inquiry is somewhat limited by its omission of interviews with grandparents or “queer elders” older than 60. Nevertheless, Brainer’s shift away from naturalizing “generation” as progression of ideologies of the self and towards investigating “generation” in the negotiation of vertical ties is a significant contribution to the anthropology of aging.

Following the discussion of intergenerational aspects of coming out, each chapter analyzes queer experiences in relation to feminized family labor. Chapter 3 examines the labor Taiwanese lesbians and trans men do to “carry on” their families, offering a feminist critique of those studies of patrilineality that take normative fatherhood as their primary guidepost. Chapter 4 considers the aspirations of parents and grandparents for their queer (grand)children in ways that bring gender and class back into conversation with the production of generations. Chapter 5 links the normative performances of queers to families’ navigation of public institutions, exploring the possibilities and constraints of strategies for accumulating wealth and power as a buffer to the social penalties of being publicly queer. Chapter 6 completes the analytical shift from “queer self” to “queer kinship” by focusing on the connecting role played by siblings. Throughout, Brainer inquires into both queer experience and kinship roles as emergent and interdependently transforming throughout the life course.

Brainer’s training as a family sociologist and her professional affiliation with sociology and with women’s and gender studies show throughout the book, but so does her turn toward anthropology. The absence of queer anthropological citation is noticeable (e.g., Blackwood 2011 and Sinnott 2004 on butches and femmes in Southeast Asia), but her citation of contemporary East Asian (and particularly Taiwanese) scholarship is a strength. Her attention to a wide variety of family relationships also complicates any treatment of life stages as straightforwardly sequential identities in ways that may be particularly valuable for queer anthropology.

The book’s introduction and conclusion include a discussion of the methods of data collection and their limitations. Brainer’s recruitment through ex-partners/lovers was a clever way to contact queers outside of the overrepresented Taipei-based queer activist scene, and her joking reference to this method as “the lesbian snowball method” is a delightful example of how this book situates its knowledge from her standpoint (p.9). She is correct in noting that her conclusions are limited by under-representing working class families and transnationality, although chapters 4 and 5 provide a valuable starting place for more attention to social mobility. She also laments not being able to effectively recruit grandparents, a reflection this journal’s audience will particularly appreciate. Yet, her analysis treats grandparents as potentially nuanced stakeholders in the families of queer Taiwanese, particularly in Chapter 4’s critique of discourses that frame grandparents as mere vessels of family values. This book serves as a persuasive proof of concept that should spark the attention of anthropologists to continue to explore queer subjectivity and kinship across the life course.

Brainer’s analysis of queer possibilities across an interconnected life course raises important questions for scholars of gender and kinship. The clarity of her analysis, the brevity of each of the seven chapters, and the accessible way she narrates her informants’ experiences all make this a good choice as a teaching text. Queer Kinship and Family Change in Taiwan leads life course ethnography to value how queer kinship deepens theories of aging.