Virginia’s story: How the COVID-19 crisis can help us think about older adults who live in perennial abandonment

In the latest post of our 'The Age of COVID-19' series, Magdalena Zegarra Chiappori takes us to a shelter for abandoned older adults in Lima, Peru to consider what we can learn about resilience, vitality and existing.

Magdalena: I have to go home now. But on Monday, I can bring you the Coca-Cola you asked me for.

V: I’m not interested in the soda. You’re what’s interesting, someone to talk to. I don’t want to be left alone. Give me your hand; don’t go just yet. 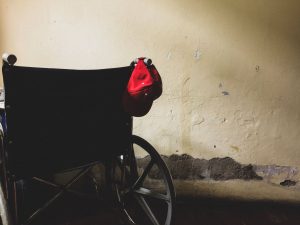 They had told me about Virginia many times. It wasn’t until my sixth month in the shelter (in Lima, Peru) that I met her. The first day that I saw her and spoke with her was in the first aid station. I saw how her look would go vacant while she was waiting. Though maybe now my memory deceives me about what was my first encounter with Virginia, I seem to remember that, after a little while, a woman went up to her and hugged her, with affection. I would learn later that, for Virginia, this was Doris, her “mom”, who was a nurse working in the shelter where I did my doctoral research and where Virginia had been living for five years now. I would also learn later that Virginia was schizophrenic and that, as I had been told, this was part of her delirium.

The first impression that I had of Virginia made me want to get to know her better and so I dedicated more time to speaking with her. One day, when we were sitting on the courtyard benches, she told me that she wanted to search for her father. Virginia did not seem that old, but because of her schizophrenia, staff could not track her life history and were unsure about her age. Maybe she was around 60 or 70, so it was not impossible that her father was still alive with 80 or 90 years old. She took out a piece of paper from the plastic bag in which she carried around her valuables and showed me a phone number written on it. She told me it was her father’s number and asked if we could call him. I said yes and dialled the numbers. The operator’s voice answered, however, and told us that this number did not exist. For a fraction of a second, I didn’t understand how this could be, if Virginia had it written down.

Just a moment later, everything made sense: this number did not exist and, most likely, one of the staff members had written it down in the hopes of calming Virginia down in the face of her impatient demands to get in touch with her family. I understood that, in the institution, this was one of the mechanisms that were used to soothe the residents who talked about being abandoned and had a certain degree of deterioration. They gave out non-existent numbers that generated great expectations among those who were looking to reconnect with their loved ones. I suppose that the hope to once again see the face and feel a hug of a loved one never totally disappeared.

Virginia told me many times that the loneliness in which she lived made her go crazy, and that not having what she called “vida afectiva” with the residents or her family – a bond of friendship, the possibility of a friendly conversation, care, the support of someone – caused her pain and contributed to making her illness worse. When I asked her about Doris, Virginia lamented that, with months, she had grown distant and explained to me that her “plans” to recover her affection were unsuccessful.

The subjectivities of social distancing

In the current context of COVID-19, all of us, without exception, are experiencing firsthand the difficulties of social distancing. Thinking about how this new order will govern our subjectivity and our affect causes worry and desperation. We are used to the closeness of other bodies and the sweetness of skin on skin; this new situation presents an undeniable challenge for our species. But what happens when the possibility of having closeness, intimacy, affective bonds, or company does not exist? The quotidian life of Virginia is the perfect example of what it is like to live perennially in social isolation, deprived of meaningful relationships, abandoned. I think that these uncertain times could be key moments for understanding the reality that many elderly people live all over the world. In getting near to their stories, we could think about the new ways in which they, so often invisible, can inhabit the world in a more satisfactory way.

In the midst of her loss, the life of Virginia is one of a vulnerable older woman who does not give up waiting, who resists temporality, who is resilient. The perennial lack of affection does not make her give up on life. To the contrary, evils afflict her day after day, her “nerves” take power over her, but, despite it all, she remains firm in the midst of an institution in which she, as a person, means very little. This doesn’t matter. Virginia weaves with her actions a universe in which her fight for care, her ambition to permanence, and her eagerness to be recognized as a person of moral worth speak of a human desire that I still cannot categorize through words. It is a desire that has no end, a longing that isn’t extinguished, a hope that isn’t exhausted. Virginia’s struggle is a fight to exist in a broken world. And her vitality points towards existing surrounded by love.

This piece was made possible by financial assistance from the Ruth Landes Memorial Research Fund, a program of The Reed Foundation. I also want to thank Amelia Frank Vitale for her feedback on earlier visions of this piece and to the many older adults at the institution where I worked who kindly shared their stories with me.

Magdalena Zegarra Chiappori is a PhD candidate at the University of Michigan. She is writing her dissertation on how precarious care, family and social abandonment, and forced intimacy shape the lives of the vulnerable elderly in a shelter for abandoned older adults in Lima, Peru.

This is our sixth post in The Age of COVID-19 series, co-edited by Celeste Pang, Cristina Douglas, Janelle Taylor and Narelle Warren. Please send your contribution to Narelle.Warren@monash.edu