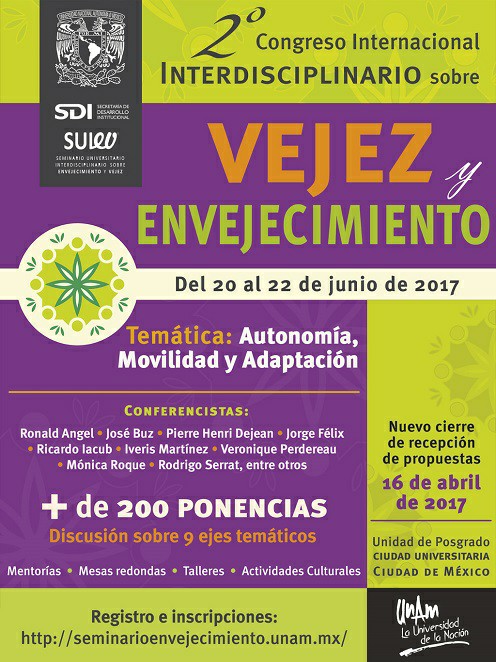 The Second International Interdisciplinary Congress on Age and Ageing was held from June 20th to June 22nd, 2017 at the National Autonomous University of Mexico (UNAM) in Mexico City. The event, organized and led by Veronica Montes de Oca, sociologist and gerontologist, brought together participants from numerous countries and disciplines throughout Latin America, Spain and France, to discuss autonomy, mobility and adaptation in aging. The field of anthropology of aging was well represented, as well as sociology, psychology, philosophy, geriatrics, design and the arts, among others.

Iveris Martinez, Past-President of AAGE, gave one of the “master lectures” at the Congress on “Designing environments that promote social participation in aging populations – an interdisciplinary experiment.” In this, she called for moving out of our comfort zone and thinking creatively about collaborations across disciplines and age groups to address the potential challenges of population aging, such as social isolation and limited mobility. Iveris and other invited speakers also met with students during daily mentoring sessions to advise them on their career paths and answer any substantive questions. The event ended with student prices for photography and poster presentations, as well as daily cultural events.

As past-president of the Association for Anthropology,Gerontology and the Life Course (AAGE), I am interested in mentoring anthropology students in careers in aging and the health sciences. I am currently Endowed Chair in Gerontology and Director of the Center for Successful Aging at CSU Long Beach's College of Health and Human Services. I have a joint PhD in Anthropology and Population and Family Health Sciences (Pubic Health) from the Johns Hopkins University, and have been working in Public Health and Medicine conducting research and teaching on social and cultural factors influencing health throughout the life course, with an emphasis in aging, immigration, and Latin American populations. I have experience working with with local, statewide and international government agencies. View all posts by Iveris L Martinez