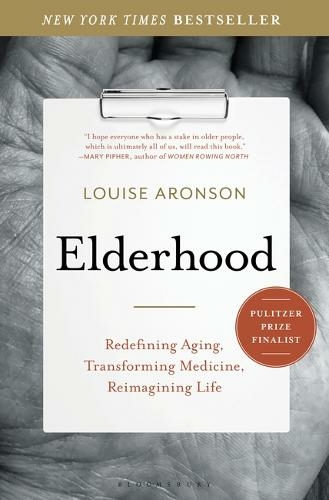 University of California San Francisco professor and geriatrician, Louise Aronson’s newest book, Elderhood: Redefining Aging, Transforming Medicine, Reimagining Life (2019), provides a comprehensive and sweeping look at how the medicalization of aging has negatively affected our views of older adulthood. This book is both a memoir of her personal experiences caring for elders and a treatise on how we should reframe aging in our society. The book outlines depressing stories of  misdiagnosis and maltreatment of older adults as the result of ageism rooted in our medicalization of the aging process. The author also counters these discourses by providing suggestions about how to transform medicine and rethink aging. This monograph brings together research from anthropology, sociology, psychology, biology, and public health to examine the roots of ageism that dehumanize older adults. The author artfully weaves research findings with recommendations for physicians and society-at-large to learn to respect and value elderhood.

The fourteen chapters are grouped into 5 sections that follow the life course: from birth and childhood, through adulthood and elderhood, on to death. These chapters also provide a life course analogy of the author’s own process toward becoming the geriatric educator that she is today. Section one, “Birth,” has only a single chapter and serves as an introduction to the book and to her life as a geriatrician. She recalls that midway through her first year of medical school, weary of chemistry and biology courses, she started contemplating a switch to graduate school in medical anthropology or policy because it “provided glimpses of a worldview absent from my medical textbooks and the lectures I attended” (3). This chapter sets the stage for the many experiences that have disillusioned Aronson throughout her medical training and geriatric career.

Section two on “Childhood” is the largest one in the book, containing five chapters that delve deeper into the causes of the unequal spread of medical specializations. Aronson argues that a great deal of interest in the field of medicine goes to understanding and treating conditions of childhood, and this to the detriment of geriatrics. With chapters titled “Infant,” “Toddler,” “Child,” “Tween,” and “Teen,” she argues that pediatricians address many of the social and medical needs of children, but few physicians or other professionals are trained in the unique aspects of older adulthood. In chapter 5, Aronson points out that the current standards of medical education emphasize algorithms, statistics, normativity, and standardized protocols that work to exclude older adults and many others who fail to comply to such a narrowly-defined medical conceptualization of ‘normal’ (63). By beginning medical education with the expectation that all humans should present to their physicians like Norm, future medical professionals are learning to treat aging as experiences outside of the normal, thus systematically reinforcing ageism in the health care system.

Section three, “Adulthood,” contains four chapters (“Young Adult,” “Adult,” “Middle-Aged,” and “Senior”) highlighting the author’s experiences completing medical school and finding her way to a career in geriatrics. Although this book is filled with several heartwarming personal stories about her journey, this section of the book also includes brutal honesty about the author’s experiences with stress and burnout. She talks in detail about the experience of what she terms “the snap” (220), or her breaking point that led to a period of self-imposed unemployment. She details each step of the physician burnout process from the research literature – from emotional exhaustion to depersonalization to reduced accomplishment – she highlights how she experienced each of these phases. She reports that her exhaustion and work stress caused mood swings at home ranging from “the calm, cheerful person I mostly was with patients and colleagues into a whirling dervish of wrath” (216). Upon recognizing that she “lit up” the burnout scale (220), she began taking time off work to re-evaluate her goals and determine if she was still able to rectify her personal goals with the field of medicine as it is practiced in the U.S. today, a process that took a year and a half.

The fourth section, on “Elderhood,” contains three chapters (“Old,” “Elderly,” and “Aged”) most notable for Aronson’s evisceration of the modern system of medical education throughout the book.  She  also offers concrete recommendations for the future: according to the author, medical education standards will need to be completely redesigned to include a foundational understanding of the socio-biological nature of aging. She rightfully states that Western biomedical education devotes few resources to teaching students about aging or elder care, resulting in a sharp geriatric provider shortage She does not, however, provide recommendations or remedies for the currently critically understaffed geriatric workforce. Research shows that few students are willing to consider geriatric or gerontology careers (Haron et al. 2013; Meiboom et al. 2015; Ní Chróinín et al. 2013), so this oversight detracts from her overall message of hope for the field of geriatrics. In chapter 4, she points out that dementia diagnoses are frequently missed until its later stages due to inexperience, lack of training and skills, and lack of time reported by physicians.  At her own place of work, she discloses that dementia diagnoses are uncommonly low, partially because physicians “feel there’s no point in making the diagnosis, since they have little to offer by way of treatment” (53). To remedy such problems, Aronson calls for an age-inclusive curriculum for all medical students throughout their training and careers and for replacing American medicine’s current disease-centeredness with a new “care paradigm” (379) to allow for an emphasis on the concern for the human needs of patients of all ages and stages of life.

Section five, “Death,” contains a single, short chapter titled “Stories,” that highlights the disconnect many older adults feel because of our society’s focus on the physical deterioration of appearance as we age. She analyzes an essay by Emily Fox Gordon in which the author conveys the broad societal disconnect between the reality of the lived experiences of old age and our beliefs about aging. Fox Gordon’s complaints about stiffness and pain are tempered because others have deemed her “young-looking” and therefore concluded that “being old wasn’t half bad” (397). To this effect, Aronson indicates that we are all affected by such views that prioritize physical appearance and strive to remain young, sharing her own struggles with letting her hair go gray and signaling to others that she, too, is aging.

Throughout the book, Aronson argues that aging and dying are medicalized in ways that do not consider the impact on older adults’ wishes and dignity. Older patients are provided with ineffective and even harmful options at the end-of-life, caught in endless quests to conquer and cure diseases rather than respecting patients’ wishes about how they want the end of their lives to look. For example, Aronson recalls the story of Laila, a woman with dementia and challenging behaviors among her house call patients. Because Laila had diabetes and dementia, she frequently fell and developed infections to which the family would often call 911 for assistance. Paramedics would contribute to her trauma experiences by applying medical devices to her body and rushing her to the hospital where she would receive more “bodily assaults and invasions” (210) in unfamiliar rooms by strangers.  Geriatric training and expertise allowed the author to identify the interpersonal and medical reasons for her screaming and challenging behaviors in the comfort of her own home. Additionally, in chapter 11 the author tells the story of Cathy’s long battle with cancer. Aronson states that although Cathy was on hospice care, hospice has “transitioned from vocation to industry” (299), resulting in inconsistent care practices in an increasingly for-profit business enterprise in the U.S. Cathy’s family was left with an incredible burden of home health care tasks to conduct themselves without proper assistance or training. These are just two examples Aronson shares to illustrate the ways that medicalizing aging has resulted in inappropriate treatments and prolonged suffering.

This book would be excellent material for health professionals, policymakers, service providers, and the general public.  It would provide them with an insider’s critique of the invasive and sometimes pointless treatments with which modern medicine battles the “disease of aging.” Especially delightful in this work is the evidence of Aronson’s training in creative writing. This is reflected in the poignant ways in which she is able to describe and reflect on her own personal experiences and the failings of the modern medical establishment throughout the text. However, less cogent in the sprawling text are her musings on the positive aspects of aging, which may not be entirely convincing when juxtaposed against the generally grim picture she paints of physician ineptitude and societal age discrimination. The text is a bit too long and redundant in several places. For use in upper-division anthropology or gerontology courses, utilizing sections of the book to facilitate understanding of specific topical areas may be more helpful than requiring students to read the entire tome.