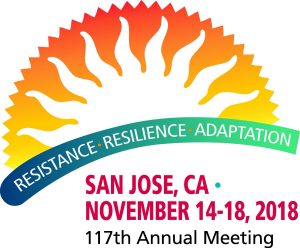 What a great 40th Anniversary for AAGE. Yes, it was our group was incorporated as a non-profit professional society in Illinois by our first AAGE President, Christine Fry. The recently completed AAA meetings showed that we are alive and thriving. Despite having some the worst air quality of any place on earth for at least one day of the meetings, it was a wonderful gathering which continued to nurture the synergy between AAGE and the Interest Group for Aging and the Life Course.
For the 8th year we collaborated on a reception for new book authors and a powerful interlocutor event: “Ethnography of Health Care and Life Extension,” where myself and the new AAGE President interviewed Janelle Taylor interviewed Professor Sharon Kaufman about her various books and their contribution to the anthropology of aging and medical anthropology. 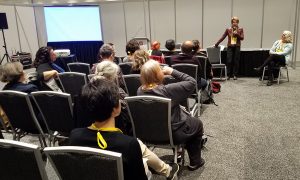 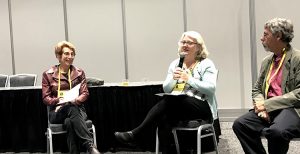 Above from the Interview of Sharon Kaufman AAA 18

As usual we had a lively networking dinner with 22 participants. An exciting aspect for me was the nice mix of long established members such as myself, former AAGE Presidents Maria Cattel and Iveris Martinez, but also a group of young scholars and budding grad students completing their Ph.D. research. It is interesting to note that among the group were new members from China, Japan, Netherlands and Belgium. 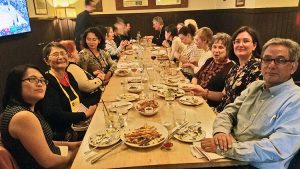 One of the intellectual highlights of the meeting for us was our well attended Invited Session: “Moral Entanglements and Moral Economies of Elder Care in East Asia” 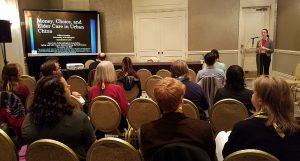 Of course we once again had a co-business meeting of the Interest Group and AAGE with reports by committee chairs, discussion of the future direction of the AAGE/Interest group collaboration and new session ideas for next year’s meetings. Jay Sokolovsky also requested that people send him ideas for next years Interlocutor Event at AAA in Vancouver, Canada and mentioned that it should be someone in that area. It does not have to be someone in anthropology, but a person or small group which has something important to say to us about their research or a new book. AAGE President Janelle Taylor also announced that the next independent AAGE conference will be in her hometown of Seattle, in the summer of 2020. We also had the presentation of this year’s Margaret Clark award by Emily Wentzell to Rose Keimig

Devva Kasnitz talks at our business meeting about disability issues within AAA and future collaborations with AAGE and the Interest Group.

One of the wonderful new things which emerged at the meetings was an emerging collaboration with the Disability Studies group which was very active at San Jose. I had the privilege of being one of the discussants in a wide ranging session on Disabililty and Aging – “Life course strategies, discourses of institutional values, and ethics in imagining aging with or without disability or aging into disability, chaired by Devva Kasnitz. At the business meeting Devva spoke to us about her group’s efforts to push AAA for making all sessions more accessible and for future collaborations with our network. For example, we talked about the SFAA March 2019 meetings in Portland, OR, where the Disability network is organizing sessions linked to aging studies. We also hope to share a display table there and some of their members will be part of a breakfast panel, Saturday of the meetings organized, by Maria Vesperi and myself: “Change-Makers: Research and Careers Informed by Anthropological Approaches to the Study of Aging and the Life Course.”

If that was not enough for the business meeting…to cap off the event we hosted the frenzied final auction bids of books to fund the Jacob Climo Student Travel Award, AND a heritage AAGE Teeshirt. We now have enough money to be making an award of at least $250 to a student for the next AAA. Maria Cattell and I will be sending out more information about this in the near future. See information about the AAGE awards at: http://anthropologyandgerontology.com/about-aage/awards/ 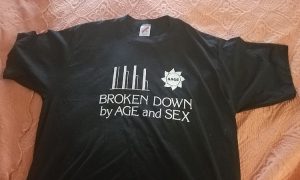 Onward to our next co-created adventures!