In the last quarter of 2016, we have identified about 60 articles published at the crossroads of anthropology and gerontology. AAGE members published no less than a quarter of those articles, attesting to the prolific activity in this group. This periodical update of recent publications will be a regular feature of AAGE, and each update will be supplemented by a brief commentary that elaborates on a couple of the member contributions.

While all of these contributions deserve a read for those of us interested in the state of the field, for this post I want to highlight just two articles, both of which discuss the role of social engagement and how it relates to successful aging.

In the first article, AAGE member Howie Giles and his colleague Shaughan A. Keaton propose a conceptual model of an intergenerational encounter. In this model, based on earlier research into how younger and older individuals communicate with each other, they map how older and younger individuals linguistically accommodate this encounter, and show possible processes and consequences that result from under-, over-, or non-accommodation. For instance, an older individual may under-accommodate the younger individual in the intergenerational encounter, for instance, “in the form of painful self-disclosures which, among older communicators, typically consist of unfortunate personal information on topics such as poor health, immobility, or bereavement and often perceived by others as disconnected, egocentric, or “grumbling”. This results in anxiety and uncertainty on the part of the younger individual about how to respond.

These kinds of encounters may lead to lower communication satisfaction, and the older individual may, as a result, experience lower self-esteem and subjective wellbeing, ultimately resulting in feelings of being unsuccessfully aged. Keaton and Giles suggest that the communicative model they propose may “help reduce miscommunication in these situations by alleviating disparagement of outgroups (e.g., doctors and nurses using over-accommodating language and tone with their older patients), thereby allowing more effective and accommodative language selection, and, hence, better patient care.”

Whereas Keaton and Giles base their insights on the close study of linguistic processes in intergenerational encounters and the evaluations of those encounters by older individuals themselves, Mikkelsen discusses the concept of ‘successful aging’ as circulated in and by the Danish state. He argues that in the Danish conception of successful aging, loneliness, as a form of undesired disengagement, has become seen as a negative side-effect of the egalitarian society in which the individual’s independence is cherished. In the Danish imaginary of successful aging, loneliness threatens both the functional and moral obligation to stay socially active. Social isolation and loneliness have become the new illnesses of old age, and their health effects have been compared to heavy smoking. This depiction and discourse, together with the emphasis on the (individual) responsibility for successful aging, Mikkelsen argues, has left no room for solitude: the desired state of being alone. Researching male seniors and following home helpers, he argues that in Denmark, solitude can be seen as part of the Lacanian Real, excluded from reality, unspoken, “unthinkable”, epitomized by the fact that there is no Danish word for solitude. To age successfully one has to be social engaged resulting in home helpers trying to “trick” the older men Mikkelsen studied to become socially active. These efforts, he suggests, may in fact be “counterproductive, since they frame solitude in later life as failure: we are not “successful” at aging if we are not socially active”. 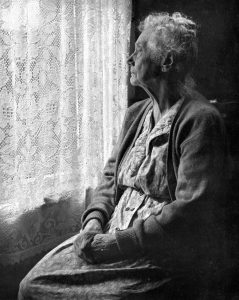 Can solitude be just as dignified as ‘success’?

Both studies show the importance of approaching successful aging from the subjective perceptions of older individuals themselves. These studies also show the diversity of ways we can think of “successful”, and make us conscious of the limitations of the successful aging framework and the importance of listening to the voices of older individuals in this debate. Giles, Keaton and Mikkelsen bring new and unique perspectives (linguistic and Lacanian, respectively) to the growing anthropological critique of “successful aging” found in recent work by Sarah Lamb (2014) and Lamb and others (2017) and Robert Rubinstein and Kate de Medeiros (2015). These critiques have also drawn our attention to the socio-cultural assumptions and limitations of the concept of successful ageing as proposed by Rowe and Kahn (1997) and demonstrate the contribution of the anthropological perspective in current debates about aging, well-being and care. The increasing popularity of this concept in local and national policy makes the contributions of anthropologists even more crucial.

Jolanda Lindenberg is senior researcher at the Leyden Academy on Vitality and Ageing, a knowledge centre on ageing and vitality. She has been conducting fieldwork in a residential care facility and the surrounding neighborhood in Amsterdam, the Netherlands, since 2011. Her main interest lies in age identification and she enjoys researching this from a linguistic anthropological perspective. Besides her fieldwork, she is involved in various multidisciplinary projects ranging from life satisfaction research to image of older persons. She has co-developed an assessment of wellbeing: 'The Life and Vitality Assesment'. She is currently coordinator of the 'Wellbeing of Seniors' course, developed with support from the European EIT Health Knowledge and Innovation Community.