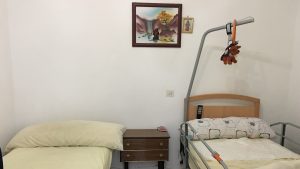 My thesis project tries to understand the relationships of domestic care in situations of illness and disability, situating it as a co-construction based on localized experiences. With this, I try to understand the cultural system that is built through domestic care; a sort of complex system that is born of localized care but where I choose not to lose the detail of everyday interactions. To do this, I go into the micro-universe of particularities, where structures are reflected, but at the same time where social changes are (re)produced.

This ethnography deals specifically with the long-term daily care of older men spouses towards their wives in situations of illness and disability. My research occurs in villages in the Spanish Levante (running along the eastern seaboard of Spain). I co-research with older, retired and working-class men, who have never previously had to care within the history of family care, but do so now because of a lack of alternatives which have arisen due to changes in intergenerational care reciprocities (Comas d’Argemir, Alonso and Deusdad, 2018), including unwillingness of younger generations to provide care.

My interlocutors take care of their wives, who are ex-housewives who had long careers in domestic work and care. Their wives were the great architects of family cohesion and the idea of belonging, the creators of family memory and material culture: the so-called kin keepers (Hareven, 1984). These women were late heirs of a Francoist family education (in which they were educated that their value was as housewives), yet now live with a physical or cognitive disability that makes it impossible for them to speak or move with autonomy. I analyze not only the diachronic processes of this micro-universe of care, but also the synchronic ones, and their changes.

For a little over ten months, I have lived with these couples (five cases in total), observing their trajectories and interactions of care (including carelessness), their (co)dependencies and (co)learning. In listening to their stories of care, I learn the stories of men who take care of the present, and of women who take care of the past. This mutuality of care is important: despite their disabilities, the women continue to take care of their families with different intensities and forms. Through my research, I have the opportunity to observe the uncomfortable and sarcastic gestures or smiles accomplices that hide the afflictions of the disease, disability, old age, and the very act of caring.

Moreover, although my point of anchoring and initiation has been within couples of care (where the man cares), I have been able to explore the hodgepodge of family, friends, and institutions involved. What has been particularly interesting to me is who ends up drawing what I consider a “constellation of care,” a sort of microsystem of care that changes and fluctuates by composing different figures over time, according to how care is orchestrated or family times align (Häberlein, 2015; Coe, 2015). This is important in the Spanish Levante, where kinship, life course, and state policies of care are framed according to governmental conveniences.

The trajectories of care have taken me to various daily spaces, ranging from homes, bars, supermarkets, markets, day centers to ICTs. The geographies of care (Milligan and Power, 2009) have been a significant contribution in this regard. I have delved into how ideas of belonging are built into care, to the point that the village becomes an extension of the home, a sense of extended kinship (Thelen and Coe, 2017). Through close links and life stories built with the neighbors in a kind of “imagined community” (Anderson, 1993), these relationships constitute a mattress where most community care rests. 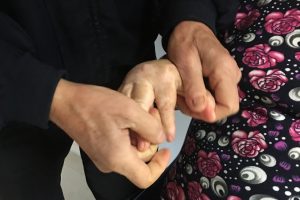 The interactions, on the other hand, have led me to ask myself about the idea of bodies as culture (Scheper-Hughes and Lock, 1987), particularly that of a couple’s embodiment. I focus on how a mutual corporality has been built over the years of coexistence and how it has influenced the synchronization of their bodily actions and the interpretation of their desires during daily care.

In short, my research tracks the development of an embodied habitus (Bourdieu, 2008). The mutual fragility of their bodies, the energy, and vitality that they demonstrate, lead me to think about the co-dependencies (Banens and Marcellini, 2015), the co-care, as well as the levels of autonomy and agency. However, living in their interactions has also shown me the conflicts and tensions of care, its management, and the emotional overflows, as well as power relations that are established between the caring woman and the caretaker man. In doing so, what is emphasized are the forms of victimization and the contradictions in the moral constructions between hatred and love, commitment and conjugal obligation.

I cannot leave outside of my analysis the gender transformations that are developed in these cases and particular moments. In this area of Spain, noted for its bullfighting, masculinities and femininities intermingle with the course of life. Retirement is mostly a milestone that marks the productive end of man, intensified by the fragility of an old age that settles (Chapman, 2004). The fatigue, the lack of memory, the loss of vision and hearing, seek to be countered by a new stage as being productive, but in a new field where the political economy has avoided with determination: domestic care.

My intention is summarized in exploring these changes in the histories of family care, focusing on a more recent phase, when men care. Furthermore, my research takes place in a context where old age is shaped by a social crisis of care. In the absence of effective care policies, the Spanish government takes advantage of the deeply-rooted care culture of the Mediterranean family to retract its obligation and social commitment (Comas d’Argemir, 2014). By illuminating the silences of the state, my research contributes to a gendered analysis of everyday care in later life.

Carlos Chirinos is a Ph.D. student at Rovira i Virgili University, Tarragona, Spain. He can be emailed at carlosalonso.chirinos@urv.cat

Coe, Cati (2015) “The temporality of care: gender, migration, and the entrainment of life-courses”. In Erdmute Alber and Heike Drotbohm (eds.) Anthropological perspectives on care. work, kinship, and the life-course. New York: Palgrave Macmillan, 181-205.

Häberlein, Tabea (2015) “Intergenerational entanglements-insights into perceptions of care for the elderly and life-courses in northern Togo”. In Erdmute Alber and Heike Drotbohm (eds.) Anthropological perspectives on care. work, kinship, and the life-course. New York, Palgrave Macmillan, 159-179.