Of grandparents, memories and the pandemic

In this latest post of The Age of COVID-19 series, Tannistha Samanta describes how grandparents provide a valuable intergenerational resource for living through and following the COVID-19 pandemic. 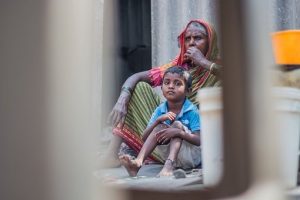 While growing up in a small town in the eastern state of Bengal (India), our summer vacations would be spent in Kolkata at the maternal grandparents (or mamar bari, as fondly referred to by Bengalis). Sitting comfortably on a woven bamboo mat in sultry afternoons, my grandfather would tell us haunting stories of poverty, hunger and death in the most quotidian manner. One of his often recurring narrations of famine was of a young woman who came to my grandfather’s household begging for “bhaat er fyaan” (starchy rice water) one morning and was found dead the same evening, a block away. As someone who had survived the devastating Bengal Famine (1943), the communal massacre of 1946 (also known as the “Calcutta Riots”), and the Sino-Indian war (1962), my grandfather’s sharing of boyhood memories to my wide-eyed, curious eight-year-old sister and I was not a deliberate attempt to blur the boundaries of childhood and adulthood. Rather, he sought to make the spontaneity and unpredictability of life “knowable”.

Childhood studies scholars have shown how children are not just a tabula rasa incapable of understanding the uncanniness of ordinary experiences, even when it radically contests our idyllic notions of childhood socialization. Or, as anthropologist Veena Das (2015, p.60) notes, “understanding children opens the door to answering questions about the regime of the social itself”. My grandfather died a year back. He was 93. His boyhood (and later adulthood) memories of death, riots, travels and resilience-lay buried with him.

Grandparents as “keepers” of memories

As the world sees consistently higher rates of COVID-19 mortality among the older population, the personal account above allows me to reflect on the possibility of understanding grandparents as keepers of social memories. Admittedly, anthropologists have shown that individual accounts of the past demonstrate how the social permeates the personal. Hence, it is reasonable to assert that, through oral, ritual and bodily practices, grandparents are keepers of a community’s collective remembrance of the past. Noted memory scholar Maurice Halbwachs (1992) argued that memory forms a vast complex of unofficial, noninstitutionalized knowledge, often a counterweight to more privatized and established systems, representing the “collective consciousness” of peoples and nations. Again, from an affective labour perspective, this raises a question: how are we to understand the intimate obligations of (child)care that grandparents globally provide to keep familial collectives afloat, under the onslaught of the COVID-19 pandemic? More generally, how can this painfully irreversible loss shape our understanding of families, generations and cultures in the new world order following the pandemic?

In a context where multigenerational living is still the most common (Desai & Barik, 2017), (~59% of households report having older parents co-residing with married child/children) and desirable form of living arrangement, India has a larger epidemiological challenge. However, contrary to epidemiological concerns of disease risk owing to younger grandchildren at home who are effective carriers of viruses, I have shown elsewhere (Samanta, Chen, & Vanneman, 2015), older people in such households have similar odds of being sick as those without grandchildren. In particular, three-generation households (those with grandchildren) have higher protective effects against morbidity for older persons than any other form of living arrangement (e.g. living with a spouse or with adult children).

One possible explanation is that multigenerational households offer certain morbidity mitigating factors such as greater kin availability, closer network ties and companionship of grandchildren, known to improve overall wellbeing. Additionally, in India, such households are generally wealthier; incomes are pulled and resources are shared, thus ensuring greater access to decent healthcare. Research from other Asian contexts (see Chen & Liu, 2012 in the context of  China) that rely on grandparenting as a crucial familial resource show that grandchild-care is neither universally beneficial nor detrimental to elderly self-reported health. In fact, in some cases, grandparenting has protective effects.

Will the pandemic recast the deficit narrative?

Sadly, in India, the language of gerontology has been mostly “alarmist, almost apocalyptic”:  woven around frailty, dependence and a social pathology of disease and debility (aptly pointed out by Lawrence Cohen in his anthropological classic, No Aging in India: Alzheimer’s, the Bad Family and Other Modern Things (1998) As scholarship suggests, older Indians, though revered through social-moral routes of the filial obligation, are not perceived as active caregivers (rather as care recipients, see Brijnath, 2011) or in other positive roles. This is perplexing since it is not uncommon to find grandparents taking care of grandchildren in dual-career households. In rural China, for example, authors show that grandparents are seen as “family maximizers” (Baker & Silverstein, 2013) since they assume the full-time role of parenting of left-behind grandchildren when their own adult children migrate to cities. This kin-keeping role of grandparents is crucial in maintaining lifetime continuities and family traditions especially in the face of crisis.

The anthropological notion of “kinscripts” (Stack & Burton, 2016) – a framework that examines how families as multigenerational collectives work out intimate obligations – is all the more relevant in contemporary times as the world will experience massive job losses, homelessness, migration, death of loved ones and divorce in the aftermath of the pandemic. As the death toll rises and the pandemic continues to hurt the social model of families across the globe, our collective acknowledgement of grandparents as a valuable intergenerational resource needs to be heightened.

As we practice responsible physical distancing, keeping away from older members in our community, let us remind ourselves of the many positive roles that our grandparents typically play: as kin-keepers, caregivers, storytellers and moving reservoirs of social histories. Let this pandemic serve as a vehicle to recast our often alarmist notion of population aging as a “problem” demanding economic and social resources and instead focus on the enriched selfhood of older people as active regenerators of families and generations.

Tannistha Samanta is currently a faculty member with the department of Humanities and Social Sciences, Indian Institute of Technology, Gandhinagar. She received her PhD from the Department of Sociology at the University of Maryland, College Park in 2012. Her research is located at the interdisciplinary crossroads of family sociology and gerontology by blending quantitative and interpretive approaches. Specifically, she examines questions related to health, living arrangements, social capital, intergenerational relationships and older adult sexualities.

This is our fifth post in The Age of COVID-19 series, co-edited by Celeste Pang, Cristina Douglas, Janelle Taylor and Narelle Warren. Please send your contribution to Narelle.Warren@monash.edu