As this month’s member news attests, it is not only the senior members of AAGE who get all the accolades. All of the entries for this month’s news are students and early career (within 5 years of last degree) members who deserve tremendous praise for finding success in this highly competitive field.

For those of us who can no longer count ourselves among the ‘early career’ group, it is always nice to remember where we came from and how AAGE influenced where we are now. In what is also to be a regular feature of the news, scroll down to see a short reflective piece by one of our long-standing members, explaining why they continue to participate in AAGE and what it has meant for their career. You might think of this as member news on a different scale of time, but we also hope it encourages our current members to make the most of this association and to get to know their colleagues.

Now, to our members! 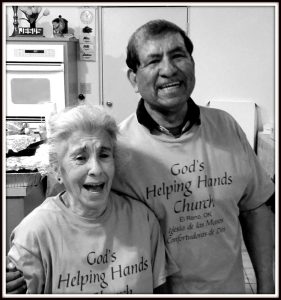 Elisha Oliver, Doctoral Candidate in Bio-Cultural Anthropology from the University of Oklahoma Anthropology, will be a guest contributor on the Anthropology of Policy [ anthofpolicy] Instagram Visual Narrative Site in June.  Her work features several aging individuals from tribal, rural, and urban communities (see left, Elisha not pictured).

Congratulations to Iza Kavedžija on her new permanent position as lecturer in the Department of Sociology, Philosophy and Anthropology, University of Exeter (starting September 2016). Iza is currently a Departmental Lecturer and the Institute of Social and Cultural Anthropology, University of Oxford (fixed-term). Iza, whose work focuses on fieldwork with older women in a less affluent neighborhood of Osaka, Japan, is finishing a monograph for University of Pennsylvania Press entitled Meaning in Life: Tales from Aging Japan  as well as an edited volume entitled Values of Happiness: Towards an Anthropology of Purpose in Life (with Harry Walker), forthcoming with University of Chicago Press (in the HAU series). You can also read some of her recent publications here:

The Michigan Humanities Council has awarded a $25,000 Heritage Grant to member
Sara Lahti Thiam, as board chair of the Michigan-based non-profit Right Start UP, to carry out the Upper Peninsula Digital Histories Initiative, an intergenerational project that pairs youths with older adults to create and publish digital histories.  As the project designer and director, Sara draws on her anthropology background and public health training to harness the powers of storytelling and community engagement in an effort to improve participants’ health and well being.

Welcome to Megan Stamey McAlvain, our new AAGE student liason! Megan just completed her Master’s at New Mexico State University and is on her way to start a PhD program at University of Connecticut. She has already been busy gathering ideas about what students would like from AAGE in terms of mentoring and resources. These will be key as we start to plan our 2017 conference (so that makes Megan key to AAGE!)

Also welcome to our new media coordinator, Michelle Maynor! Michelle received her Master’s in anthropology from Witchita State University in 2009 where, together with Kansas State University, she has taught several courses on social and biological gerontology. Michelle is also a US Air Force vet who has done research and taught courses on aging vets.

Many of you will already recognize the name Linh An, but what you may not have known is that she olds a PhD in Anthropology from UCLA and is Co-executive Director of the Chinese-American Family Alliance for Mental Health (CAFAMH) in New York.  She’s more than just the person that reminds you your membership is expiring! Linh has impressed all of us with her energy and creative ideas about improving our communication infrastructure and marketing. Since day 1, she has thrown herself into the task of reaching out to potential members, expanding our community beyond academia. She will be working closely with Megan and Michelle on these plans, and I can’t wait to see what she comes up with!

Finally, welcome to Jenny Stratton, the new Portfolio Editor of Anthropology & Aging. Jenny is a graduate student at Duke University with a background in visual anthropology, whose research, photography and animation pieces focus on visualizations and perceptions of aging in the American south. She is currently working with a group of Apsáalooke (Crow Indian) youth at the Crow Native American Reservation in Montana at a National Geographic Photo Camp. We are really excited to have Jenny on board, and looking forward to see what she does with our visual feature in the journal.

When I was a doctoral anthropology student working on my prospectus,  my chair Mac Marshall made an offhand comment to me that he thought there was some sort of organization for anthropologists engaged in aging research. He sent a note of introduction to his colleague Judith Barker, who quickly brought me into the AAGE fold. That year I attended an AAGE workshop where Judith and Annette Leibing  took the time to review  my research and provide me with thoughtful and supportive feedback. I remain grateful for the warm welcome I received as a student and have remained an active member of AAGE for more than 10 years.  The AAGE workshops,  peer reviewed journal, social events organized at larger meetings, and wealth of opportunities to connect with others scholars at all stages of the career trajectory— these are the reasons AAGE continues to be an academic home. While I find value in the other professional organizations in which I hold membership , such as GSA, SfAA, and AAA,  AAGE provides me with a community of social scientists who share my wonder at the ways in which aging research and theory encapsulates the essence of the human experience.

Samantha Solimeo is is a medical anthropologist and investigator with CADRE and the VISN 23 Patient Aligned Care Team PACT Demonstration Laboratory, both housed at the Iowa City VA HCS. She is also Assistant Professor of Internal Medicine at the University of Iowa Carver College of Medicine