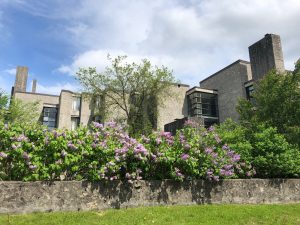 Earlier this summer, I attended TrentAging2019 “Take Back Aging: Power, Critique, Imagination.”  Focused on gerontology and critical aging studies, it was the second joint conference of the North American Network in Aging Studies (NANAS) and European Networks in Aging Studies (ENAS).  Located along the Otonabee River on the traditional territory of the Mississauga Anishinaabeg, the Trent Centre for Aging & Society hosted the conference, consisting of six plenary events, a poster session, and forty-seven panels by scholars and community members from across the globe.

TrentAging2019 emphasized the multidisciplinarity of gerontology and critical aging studies. This was particularly compelling to me as a student in a trans-disciplinary doctoral program (Social Work and Anthropology).  Disciplinary backgrounds and departmental positions were rarely discussed in presentations and not listed in the conference guide, yet the concerns of the anthropology of aging were addressed across disciplines. Anthropological questions were explored during the conference: Who and what holds memory?  What knowledges are considered valid?  How are the human and non-human or more-than-human co-constitutive?  Who is included and excluded in conceptions of personhood?  How do diverse temporalities represent lived experiences?

The opening plenary event, Storying Activisms: Reshaping Cultural Imaginaries of Aging, centred on a Trent University research program and activist-research collective about connecting and creating change through storytelling.  This event highlighted the importance of the Otonabee River as the source of intergenerational connectivity in Peterborough. This focus on story, relationship, and the connection between the human and non-human (or more-than-human) continued through the conference and was evident in the multiple presentations on the arts.

My own research interests focus on the potential of participation in the arts to improve quality of life and enhance community for older adults. Thus, I was thrilled to discover that arts engagement was foregrounded throughout the conference.  Additionally, the focus was on the transformative potential of the arts rather than only the betterment of physical health and neurological outcomes. Below I provide a snapshot of some of the key presentations.

Kate de Medeiros’s (Miami U) Play, Language and Meaningful Connections in a Poetry Program: Rethinking What Counts as “Success” in Dementia Care demonstrated how engagement in poetry could facilitate access to experiences of resilience constructed as “tied to social context” rather than based on particular individual attributes.  In Crip Queer Futurities of Aging: Emergent Timescapes, Nadine Changfoot (Trent U) used film techniques to represent cyclical and repeating time to communicate her experience of herself in relationship with her father with dementia. This showed her contemporaneously as younger and older, girl and woman, and in past, present, and future.  Jessica Robbins and Kimberly Seibel’s (Wayne State U)  work on constitutive narratives and temporalities in gardening among older African Americans in Detroit also addressed creativity and non-linear timescapes. They proposed that, as linear time often fails to represent lived experiences, it is a matter of social justice to recognize diverse temporalities.

The Sharing Dance program, another arts-based collaboration between researchers, artists and community members, focused on present moment interactions between persons with dementia and their caregivers. These interactions created opportunities for participants to “disrupt the space and reinvent it with someone else with their movements.”  Thus dance allowed for the confirming of vitality through creativity and interaction.  In confirming potentiality, these projects also contested the “tragedy discourse” of dementia.

Members of the arts-based collaborative research project Cracked: a new light on dementia described the co-writing of a play by a team of researchers, actors, and persons with dementia.  Attendees were given the opportunity to watch a film of the play.  The play was emotional and moving in its depiction of the relationality between persons with dementia and their caregivers.  One of the researchers shared afterwards that she was changed in the process of having “to let go and be vulnerable in the process” of the research collaboration.  This recalled for me a link to the Storying Activisms plenary, in which Jenn Cole suggested that researchers had a “responsibility” to be transformed, as research is conducted in and through relationships.

Discussions around experiences and concepts of vulnerability arose during the conference and raised provocative questions: When and how does art-making foster vulnerability?  What does it mean for a researcher to be vulnerable?  How is vulnerability developed for persons and for populations?

Taking a systemic perspective, several presentations focused on the threats posed by the dismantling of social welfare systems, deregulation, and climate change to health and to longevity itself.  In her plenary address, Kathleen Woodward (U Washington) (Aging and the Anthropocene) undertook a close reading of Drabble’s novel The Dark Flood Rises to examine cultural imaginaries of aging amidst an environment of climate change.  As Martha Holstein poignantly proposed in her plenary address (I’m Old and a Woman: A Lament and an Exhortation), our existence is dependent on relationships and “we have much to learn from older adults who fall” or fail to attain a certain conception of “successful aging.” Many presenters were inspired by the central question proposed in a recent article by Barbara Marshall (Trent U) and Linn Sandberg (Södertörn U): “whose lives are worth preserving in old age?”

Overall, the conference included many opportunities for networking and sharing delicious food with scholars, Trent U staff, and community members.  On a personal level, the attendees I spoke with were generous and encouraged my research interests, and it was replenishing to walk around the Trent campus.  I left Peterborough feeling grateful for the opportunity to learn from prominent scholars in critical aging studies.  It also confirmed for me that the anthropology of aging is an important part of investigations into both potentiality for older adults and the ethical call to foreground attention to the vulnerable among us as we age.

The next joint NANAS and ENAS conference will be held in 2021 in Bucharest.