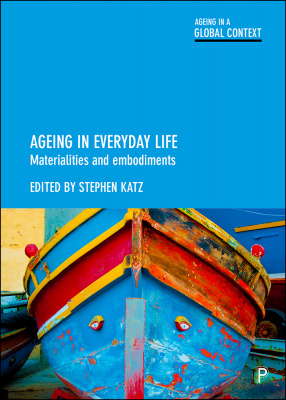 Stephen Katz’s Aging in Everyday Life [emphasis added], demonstrates how the experiences of older adults are in fact unique from other times in the life course. Twenty years ago, Aging and Everyday Life [emphasis added] (Gubrium & Holstein, 2000) was published. The latter has been received as a book that shows that the “triumphs and trials experienced in later years are not unlike those confronted at other points in life”(Wiley 2020: para 1). The difference between “and” and “in” in these two titles is worth explaining. For Katz, older adults are in relationship with things [Part 1 – Materialities] and in their bodies [Part 2- Embodiments]. There are no claims of sameness throughout the life course as there are in Gubrium and Holsteins book, neither is there an “and” that separates older adults from their everyday life. Katz and the authors of the twelve chapters in this volume, follow Deleuze’s (1993) notion that the inside and outside are folded together (9).

I first read Stephen Katz during my explorations of  ‘successful aging.’  He has, throughout his career, challenged the idea of successful aging and critiqued the measures taken in this regard (Southam, 2020). Katz has numerous books and articles on aging bodies, related technologies, critical gerontology, and ageism including Cultural Aging (2005), and a new book forthcoming on Age, Mind and Body in Later Life. A fellow Canadian, Katz is a professor at Trent University and well-known internationally. This volume’s authors have backgrounds in “social gerontology, geography, feminism, the humanities, social work, sociology, health, and dementia”(Katz, 2019, 10). They use ethnographic approaches to explore the “terrain of commodity capitalism and the potential resistance to it”(Katz, 2019, 4).

The twelve chapters in this edited volume are divided into two parts. In Part 1, “Materialities,” readers will find research and reflections on: older adults’ relationships with their ‘stuff’ over time; contemporary portrayals and future directives for care homes; the negotiation of cityscapes, leisure activities, and family; the silvering screen; and older adults navigating online dating systems. In the second part of the book, “Embodiments,” chapter authors still focus on relationships, but here in closer proximity to older adults’ own bodies. Readers will find enlightening explorations of older adults’ relationship to constructs like sexuality, fashion, dance and religiosity. Where readers once thought of sameness for humans throughout the life course, they may now see  how differently older adults relate to consumables like wearable tracking devices and high tech automobiles.

Although the volume embraces critical gerontology, most of the authors do not address power imbalances. Only the Afterword, briefly, addresses power imbalances. At this time, when awareness of racism has been heightened by George Floyd’s death, the lack of diversity and inclusion in this volume is glaring. What of the older adults who do not have the means to purchase Fitbits and self-driving cars or are marginal to the narratives of dress and fashion in the book? Only Chapter 5 highlights the underrecognized themes of colonialism and privilege and  “insidious racism” in film (87). The author, Sally Chivers, here points to country elder care in places like India and Thailand, where western privilege is maintained through relatively cheap labour. Chivers wonders why the particular potential for self-transformation in these parts of the world, is not recognized in a film like The Marigold Hotel (2011). She reminds that less can be more in India, and that this should be truthfully represented, instead of glorifying western older adults who are pursuing a life “with the dull bits cut out”(96) .

There are many real life stories shared in this volume. For example in Chapter 4, authors Gavin J. Andrews and Amanda M. Grenier explain non-representational theory (NRT) with a story for each of its five elements. In Chapter 7,  Linn J. Sandberg focuses on diverse aspects of sexuality in older men’s lives (including touch, vulnerability, laughter, and freedom) with a story for each aspect of sexuality from different men. I did react to using each story to emphasize only one aspect of a theory. In the everyday, clearly, everything is more knitted together. A similar remark can be made on the two parts of the book: to distinguish between materiality and embodiment downplays the complexity and texture of most older adults’ everyday experience, making their narratives exemplary for analytics, and not the other way around. Each man’s stories of sexuality clearly embodied all of the aspects identified by the authors, and more.

The chapters of Aging in Everyday Life are highly readable, with authors bringing their research and academic knowledge to a potentially wide ranging audience, including older adults themselves. I have shared various chapters with older friends who are working in the arts, with community groups advocating for change in long-term care, and with a few who are interested in technologies like self-tracking and high-tech automobiles. A friend advocating for a different approach to long-term care said Susan Braedley’s chapter on the Nursing Home renewed her commitment to care where the whole medical team forms a holistic understanding of people, nurturing their transcendent lives, as well as learning of their history, trauma, and culture (personal communication, Lee Reid, August 14, 2020).

Kim Sawchuk’s focus in the Afterword on the feminist notion of engtanglement best summarizes the twelve chapters in this book. She says, “If I had to characterise Ageing in Everyday Life in one sentence I would say that it was a lively contribution to a cultural and relational study of aging for the present moment” (216). In despite of its shortcomings, in all the chapters I learned more about how older adults mediate culture with their bodies and enmesh themselves with places, technologies, other things and their designs. Chapter 4 authors Gavin. J. Andrews and Amanda M. Grenier encourage an “academic form of mindfulness”. Mindfulness can be  focused attention while still having a broad awareness of how everything is connected. Author Patti Lather might call the scientific election of these entanglements of older adults “counter practices of authority” (Lather, 1993, 677). Lather has also called these types of research findings crabgrass in the lawn of academic preconceptions (Lather, 1993, 680).

By moving from “and” to “in”, Katz has provided readers with pockets of wildflowers all over the lawns of a diverse set of disciplines. The chapters in this volume sow the perspectives of actual older adults including the multitudionous ways these older adults present in the places they live.