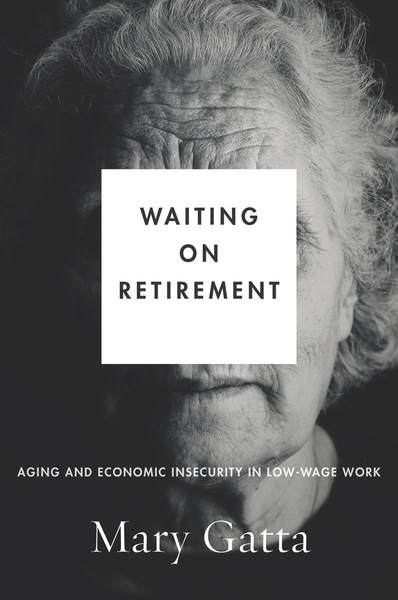 Once a waitress in college herself, sociologist and labor advocate Mary Gatta has spent her career researching low-wage work, workforce policies, inequalities and discrimination, and how low-wage workers get by on minimum and subminimum wages. Her most recent volume, Waiting on Retirement: Aging and Economic Insecurity in Low-Wage Work is a culmination of this work, offering a qualitative account of the economic insecurity experienced by low-wage restaurant workers as they age and addressing the question: “what happens after work?” (121).

The answer to this question is an alarming call to action. While the focus in the book is on the cooks, servers, bartenders, and other restaurant employees who sat down with Gatta to tell of their often heart wrenching struggles to make ends meet, in her prologue, Gatta explains why their experiences are representative of a much broader slice of the American workforce and why the United States as a whole is facing a retirement crisis. Restaurant work is a classic example of increasingly common low wage work that does not provide the income or benefits that provide a secure retirement. Wages are too low to allow for saving and paying into social security; work shifts tend to be unpredictable, making it hard to plan and save; health care and retirement benefits are lacking, and the industry is characterized by unsafe as well as discriminatory workplace practices and lack of worker protections. Gatta explains that these conditions also apply to middle-income workers for whom neoliberal policies have depressed wages, eroded public supports such as housing, health insurance and transportation, ended defined benefit plans, and increased the cost of drugs. This underscores how the American retirement crisis is not limited to the poor and foreshadows what is in store for many of us.

One informant found her 76-year old father a job rolling silverware in the restaurant where she worked. He needed the money to pay his Medicare supplement and worked there till he died at 82 years old.

The book is concise at 119 pages, consisting of a prologue, five chapters and a methodological appendix. Its core data come from 31 in-depth interviews with current and former restaurant workers, supplemented by focus group data Gatta collected for comparative purposes and enriched by Gatta’s lifelong career researching and advocating for low wage workers in various sectors. It provides a comprehensive background and history of the widespread precarity experienced by large swaths of aging and elderly Americans today. The topic of elder poverty was recently propelled to the forefront of the general public’s mind after the release of Oscar-winning film Nomadland, adapted from Jessica Bruder’s book by the same name. This means Gatta’s book will be of interest not only to academics, graduate students, and policy workers but also to lay people recently alerted to this problem. The book’s clear language, engaging first-hand accounts, and lack of jargon make it an accessible read for this broad audience as well.

Chapter one, “The New Normal,” can be read as a general introduction to the origins of certain forms of precarity in the US; it offers statistics on the composition of the low wage workforce and describes historical trends in the US labor market and retirement system. It tells the story of the erosion of the New Deal social contract, how neoliberalism shifted economic risk to the individual and changed dependency into a negative state. The subsequent three chapters chronicle the financial challenges of three generations of restaurant workers as they age, told in their own words and contextualized with a treasure trove of historic, economic, and policy facts.

Chapter two, “The Fast Money Trap,” describes the strategies a set of current restaurant workers, Gen X’ers in their 30s and 40s, are deploying to help mitigate their current and looming future economic insecurity. Because the restaurant industry is rife with age and sex discrimination, job insecurity significantly increases for restaurant workers of around this age, women in particular. One strategy involves the creation of local social safety nets based on a sharing economy and bartering system in which aging workers can share services, expertise, and resources to better weather their economic insecurity. Other workers are trying to find security in the gig economy, which offers just as little worker compensation, access to health care, paid sick days, or avenues for retirement as restaurant work. Others try to secure better jobs or start a business. Many of them adjust their expectations of what they once thought a retirement might look like, an emotional process Marianne Cooper calls “downscaling” (27).

Chapter three, “Aging in Low-Wage Work,” moves further into ‘old age’ and describes the daily experiences of lifelong restaurant workers reaching retirement age. Even though these older workers have worked continuously for decades, they are not in a financial position to stop working. For most, their ‘retirement’ plan thus consists of working longer and working indefinitely, which is complicated by their physical limits and common experience of chronic pain, as well as age and sex discrimination. Their predicament is perhaps best illustrated by the following text message Gatta received from one of her interviewees: “Hi Mary! I’ve polled some restaurant friends about their retirement plans and the consensus seems to be—hope I die before I get old. Crazy, no?” (69).

Chapter four, “Retiring in a Coffin,” underscores the reality that no long-time restaurant worker voluntarily retires from restaurant work and outlines the stressful experiences of restaurant workers forced into retirement due to health problems, restaurant closings, or other circumstances. Public assistance programs are critical for these workers and often insufficient, as the story of a person dying while waiting for Medicare benefits painfully makes clear. One informant found her 76-year old father a job rolling silverware in the restaurant where she worked. He needed the money to pay his Medicare supplement and worked there till he died at 82 years old.

Chapter five, “Crisis or Come Together,” concludes the book by outlining progressive policy proposals for a new social contract that could restore retirement security for America’s workers. It reimagines the three central tenets on which security in retirement depends: good jobs, a guaranteed retirement system based on state support as well as less volatile savings vehicles, and affordable health care so that workers do not need to tap into retirement savings to cover medical costs. The proposals are utterly sensible yet apparently not politically viable as “[t]hese ideas have been and continue to be floated and rejected” (119).

The question which emerges then is, how do we build the capacity to turn these proposals into policy? One place to start might be to tap into the resentment of those most precariously situated, such as the aging restaurant workers featured in this book. If there is anybody viscerally aware of the fact that the American Dream ideology of working hard and playing by the rules has failed to deliver on its promise, it is this hardworking lot. However, of Gatta’s informants, only about a handful have turned to social activism to fight for better jobs and stronger public policies. The rest are pouring their energy into individualized responses to economic stress or commoning practices like bartering and shared housing arrangements, which are more collectivist but still not political in nature. After reading this extremely informative and important book I am left wondering about the difference between the workers embracing political action and those turning inward. What moved the former group into activism and how can we politicize the rest? Social scientists have an important role explaining the lives of society’s most vulnerable. Can we put our understanding to use by locating and supporting those pockets of resistance with the most transformative potential?

These questions are urgent. Gatta cites economist Teresa Ghilarducci who “grimly predicts that by 2050 the USA will have 25 million poor elderly Americans” (2). On top of this, social security, the primary source of income for the majority of retired Americans, is projected to exhaust its reserves in 2037. After that, annual taxes are expected to cover only 76 percent of its benefit obligations (Goss 2010). As the baby boomers reach old age in an already weak retirement system with dwindling social security support, the number of elderly Americans financially struggling in old age will only increase in the absence of a comprehensive collective policy response.