Welcome to 2020 and call for contributions

In this year, the first of the new decade, I encourage all members, at all career stages, to send in their contributions for the Life Course Blog. You can write a little, or a lot, or simply comment on other people's posts. We welcome contributions in all forms: essays, conference reviews, poems (haikus!), videos, images, and so forth.

I had intended to post that sentence about six weeks ago but a horror Australian summer means that I am a little late. In this year, the first of the new decade, I encourage all members, at all career stages, to send in their contributions for the Life Course Blog. You can write a little, or a lot, or simply comment on other people’s posts. We welcome contributions in all forms: essays, poems (haikus!), conference reviews, videos, images, and so forth… In 2019, people shared excellent stand-alone pieces on this forum; in 2020, I also invite you to contribute to dialogue happening in this online space. Contributions can be on any topic related to aging and the life course.

In this post, I share my experience of return to my doctoral fieldsite, which also happens to be my hometown, and how a catastrophic bushfire event underscored the value and contribution of an anthropology of aging and the life course.

A view from Australia’s summer of fire

The Australian south-east coast has experienced a prolonged summer of bushfire, with major fire events occurring in the three Eastern states since October 2019. My hometown of Mallacoota, where I undertook my doctoral research on women’s aging in place, rapidly became the international face of the crisis when a dynamic 27 kilometer (20 miles) firefront destroyed about one-third of the township on December 31 2019. About 4,000 people were in the town after the single access road was cut off 17 hours previously. Conditions were terrifying (Figures 1 and 2). 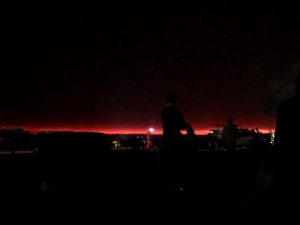 Figure 1: Image of Mallacoota, Australia, taken at 8 am on 12/21/2019 as the fire front was closing in on the township (Photo by Kerri Warren) 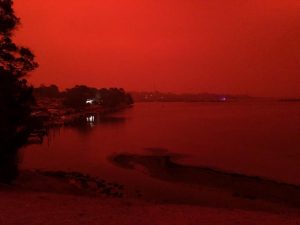 Figure 2: View over the Mallacoota lake on the afternoon of 12/31/2019, following a change of wind. (Photo by Kerri Warren)

Fires simultaneously destroy – wildlife, environments, human life, property, and more – and reveal. Figure 3 shows the destruction of the bush brought by fire, with all leaves, grasses, reeds, shrubs, and animals burned away. Such landscapes might also prompt questions of human experience, in terms of shock, trauma or emotional wreckage. Yet, as Figure 3 shows, the aftermath of bushfire also reveals the (burnt) swamp that was hidden within the bush. So too might bushfire reveal much about the humans who closely experienced it, and what it might reveal about resilience, coping, strength, community, wellbeing, or renewal. 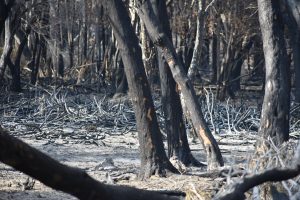 I undertook my doctoral field research between 2004 and 2006, although I had insights from growing up in Mallacoota (population 1200) and had visited countless times over the years. The midlife women who shared their stories with me (and who were often my friends’ mums or my mum’s friends) spoke about the community as a ‘caring, sharing’ place. While that was certainly my own experience, it was puzzling in light of some women’s accounts of their life experiences.

Several described social exclusion after a midlife divorce, where suddenly they were treated with suspicion by still-married friends, while others had experienced the stigma of mental illness. Those who lived with chronic health conditions explained that, as they became less socially active and more disabled, they felt increasingly alone. None of these accounts – from about half my sample – fit in with my own understanding of what a ‘caring, sharing community’ would be, and I struggled to unpack this in my dissertation.

Post-bushfire, I gained new insights into what these women meant by a ‘caring, sharing community’. Part of this was about the relationship with the land and natural environment. Mallacoota is situated within the Croajingalong National Park and is a UNESCO Biosphere Reserve. Although I evacuated, my parents and many of their generation – including my former study participants – did not. Speaking to them in the following weeks, they explained that they felt a deep connection with the land and believed that evacuating before the fires would be somehow compromising that relationship.

They gathered at the designated safer space (a place which emergency services actively defended against the fire) preceding and during the actual fire, along with other residents. Here, they provided each other with support over many hours. All described how this feeling of all being there for each other gave them strength and allowed them to stay calm. In this way, they explained that they felt a responsibility to maintain the community, however it looked and whatever remained post-bushfire.

These preliminary insights highlight an important space for anthropologists of aging and the life course. We could ask: is this further evidence of the Anthropocene and how might this shape the future? Where do older people see their place in this? What are the relationships between humans and environments? What stuff – material objects as well as ideas – matters to people? How are experiences of fire shaped by and how do they shape people’s experiences across the life course? What are the responsibilities of one person or group towards another in such moments? What relationships exist between political, social and cultural factors in such crises?

AAGE welcomes and encourages your ideas and contributions, including in response to these questions! Please email: Narelle.Warren@monash.edu